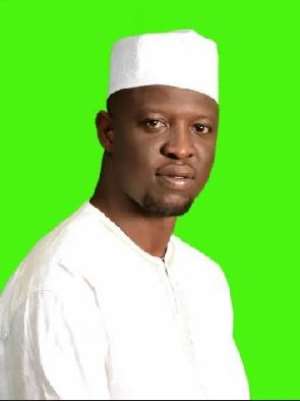 The man widely tipped to win the National Zongo Caucus Coordinator position of the National Democratic Congress (NDC) during the impending national elections, Abdul Aziz Mohammed has declared he would pick his nomination forms on Saturday.

He said following extensive consultation and backroom analysis, Saturday would mark the turning point of his political career as he picks the nomination forms to officially join the race.

“In Sha Allah, I would pick my nomination forms on Saturday and after that, my campaign team would hit the grounds running”, he hinted.

Speaking in an interview ahead of the day, the tough talking youth activist of the NDC who had been integrally vibrant in mobilizing grassroots, promised to revive NDC structures in all the Zongo communities nationwide.

He said he would work in collaboration with party kingpins to increase Zongo votes in 20-20 and take back votes obtained by their opponents.

“We are committed and therefore would assiduously organize the grassroots to revive structures of the party.

This is what would bring in the votes in 2020. We would allocate resources where necessary in all areas including the Zongos. Our desire is to make them our strong support base and no go area for other political parties”

Consequently, the charismatic NDC stalwart reveals, the party in opposition would not hesitate under his watch to reward hardworking team members even before winning power.

“We would reward hardworking team members because we need vibrant Zongo communities to inspire the youth of this country to rally behind the party to wrestle power in 20-20. As the Commando of the Zongo areas, I would lead this campaign if I win the contest, which I am certain I would by God’s grace”, he promised.

Abdul Aziz Mohammed said he would need the youth to his side after emerging victorious to take the next NDC national campaign to new higher heights.

“I have maintained that all active members of the party in Zongos would take part in everything the party would do. The soaring image of our party, new organizational dynamics must push NDC in Zongo communities to contribute to our victory. We would continue to introduce new strategies under my watch. This obviously would hinge on how effective we would manage the youth and i am prepared to lead that process” he assured.

The old Ghanascan who has earned admiration for defending NDC even at the expense of his life, said he has already identified five specific regions in the country where the NDC would take an absolute control if he gets the nod of delegates to become the first National Coordinator of the Zongo Caucus.

“These are all regions that the NDC under my watch can take absolute control. I have the network in these regions and can increase our support base. That is why delegates

must endeavour to endorse my candidature because I know, and they know I would not disappoint “

Asked if he has the support of the top echelon of the party aside the grassroots, he said he remains the darling boy of many NDC stalwarts.

Again assured “Under my leadership in the Zongo communities, we would form core functional groups to target specific areas where the voting pattern has not been favourable to us. We need to do this to win more souls, mop up the votes of our opponents. This is required to secure victory, therefore, we would go all out to destroy all the barriers hindering the prospects of the NDC. We would mobilize our gallant soldiers to join the campaign in all the communities”.

To address apathy which appeared to have affected NDC in most Zongo communities, he said the party would address the concerns of disgruntled members in the aforementioned communities in earnest in order to remove doubts in their minds. This is to make sure that victory would not escape NDC in 2020.

“We (NDC) remained the best alternative party to take up the governance of our country, and I would lead the Zongo communities in the NDC to do this sacrificial job for mother Ghana “, he pleaded.