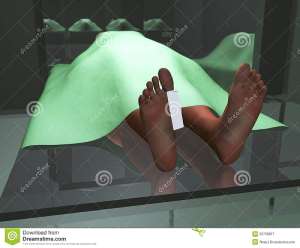 Dead bodies have been piling up at the nation’s hospitals few days into the mortuary workers’ industrial action which started on Wednesday, May 29 over poor condition of services.

The strike would undoubtedly bring extra economic expenditure to families who have scheduled to retrieve the bodies of their loved ones for burial this weekend.

Information picked up by this portal indicates that families who planned way back to retrieve their corpses for burial tomorrow Saturday are wondering what to do since the government’s morgues have been closed down.

The Mortuary Workers Association of Ghana (MOWAG) began an industrial action mid-week to press home their demand for better services conditions from government through the Ministry of Health.

The situation has brought what many said, ‘zombie traffic’ into the country’s hospitals as there were reports from the Ashanti region, that dead bodies have been abandoned in the wards at the Komfo Anokye Teaching Hospital (KATH).

The story appeared not different from other regions as there are complains of dead bodies left in hospital wards, making other patients condition worse.

Today, the Effia Nkwanta regional morgue, a referral morgue for some six Government Hospitals in the Western region and other private hospitals has also closed down, leaving many corpses stranded.

The Mortuary workers are not receiving new dead bodies nor do they allow families to pick their dead family members.

It is reported that, some of the hospitals could record not less than 10 dead persons in a day and citizens are worried as to what to expert in says ahead.

The strike happened to be the second time after earlier one which government promised but failed to meet their demands.

They are of the view that successive governments have for a long time taken them for granted and when they make their plight known, the Government uses all kinds of tricks to convince them to return to duty.

An earlier negotiation with the Fair Wages and Salaries Commission (FWSC) for better salary structure broke down. As a result, the MOWAG re-strategised and served notice that they would be reinforcing their demands strike from Wednesday, May 29, on grounds that Government has failed to take steps to look into their concerns and have them get back for negotiation.