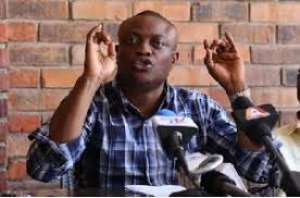 A private legal practitioner, Lawyer Maurice Ampaw has said the public pronouncements been made by the underfire Assistant Commissioner of Police (ACP) Dr Benjamin Agordzo, who has been charged with abetment to commit treason may land him in contempt of court.

Speaking through a phone interview on “Ade Akye Abia” programme on November 8, 2019 he indicated that, “What he is doing might infuriate the Judge who will be presiding over his case which has not even started because what he’s displaying in the public tends to prejudice the matter before court. In effect he is engaging in public trial of himself by maintaining that he is not guilty. He is committing contempt.”

He continued,” as the case has just been sent to court, the Presiding Judge will now go through the evidence and others brought before him or her so as to go through and make judicial analysis to determine whether the facts support the charge or not before taking the necessary steps going forward.

ACP Agordzo, the Director of Transformational Programme Office at the Ghana Police Service who is standing trial has been accused of communicating with the alleged coup plotters who the government said had been hatching an elaborate plan to destabilise the country.

He was confronted with some messages from a WhatsApp group platform at the offices of the Bureau of National Investigations (BNI) to which he allegedly admonished the members who were planning a demonstration to seek police permit.

In a statement released by the Information Minister, Kojo Oppong Nkrumah on September 23, 2019, a combined team of officers from the Defence Intelligence, Bureau of National Investigations (BNI) and the Criminal Investigation Department in their effort led to the arrest of three persons and the retrieval of several arms, explosive devices and ammunition from locations in Accra and Bawaleshie near Dodowa.

The arrest was made on September 20, 2019. The persons arrested were Dr. Frederick Yao Mac – Palm and his two accomplices namely Mr. Ezor Kafui and Mr. Bright Ofosu. It was alleged that the group known as Take Action Ghana (TAG) aimed at recruiting and radicalizing a base of young people with the mission of destabilizing the country.

The statement partly read, “The arrest and seizure come after fifteen months of surveillance and gathering of evidence on the activities of the prime suspects and others.”