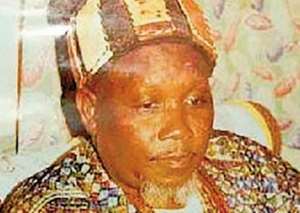 According to the Elders of the Andani Family, the kingmakers comprising Kuga Naa, Tuguri Nam, Gomle and Kpati Naa will select a new Yaa-Naa on Friday night – 19th January, 2019 – the day the funeral rites of Naa Yakubu II will be concluded.

The Elders of the Andani Family indicated that the new Yaa-Naa would as soon as possible, in accordance with the roadmap, endorse the regents of Yaa-Naa Mahamadu Abudulai IV and Naa Yakubu Andani II as chiefs.

The Abudu Family led by the Regent of Diare, Abukari Abdulai handed over the keys of the Gbewaa Palace to the Yendi Municipal Chief Executive (MCE), Alhaji Hamed Abubakar Yussif, at the conclusion of the funeral.

The Abudus were given access to the Gbewaa Palace from December 14 – 28, 2018, to perform the final funeral rites of the late Yaa-Naa Mahamadu Abdulai IV, according to their customs and traditions.

Some Andani Family members and sympathizers are expected to troop to Yendi to witness the funeral.

Mr. Nas Abdulai, Chairman of the Andani Youth Association, has called on the media to be mindful of their reportage on the funeral.

“We appeal to the media to report accurately and not the kind of misreports that have characterized the media space lately,” he said.

He assured the media that there would be enough security on the grounds to protect them and also make sure they go about their duties smoothly.

The Abudu Royal Family had completed the funeral of Naa Mahamadu Abdulai at the Gbewaa Palace.

He had 15 wives and 14 children with the Bolin-Lana being the first-surviving son.

Vice President Dr. Mahamudu Bawumia with the Northern Regional Minister, Salifu Saeed, and other government delegation were in Yendi for the funeral.

The Abudu Family performed various rituals during the two-week duration given by the Committee of Eminent Chiefs led by Otumfuo Osei Tutu II.

They performed a ritual known as ‘Logri Bobbu’ and the regent of the Abudu Family rode a horse around the sacred house (Katini Duu) some number of times to signify that he was performing his father’s funeral.

The funeral was climaxed with an Islamic ceremony at the Gbewaa Palace in Yendi.