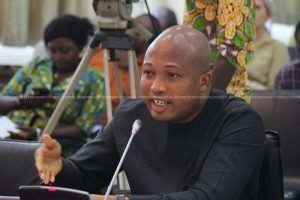 The Member of Parliament for North Tongu, Samuel Okudzeto Ablakwa has called on Akufo-Addo’s government to abandon the newly drafted Public Universities Bill that has received some form of resistance from stakeholders within the educational sector.

In a statement, Mr. Ablakwa, a former Deputy Education Minister, said the Bill, if allowed to pass could become “a crude attack on the sacred principles of academic freedom” if passed.

“I shall conclude with a passionate appeal to President Akufo-Addo to without any further delay withdraw and abandon this repulsive and contemptuous policy. This cannot be a sound policy path for a democrat,” he stated.

The draft Bill is courting controversy because of some controversial clauses putting significant power over the schools in the hands of the state.

Among other things, the draft Bill, which has been sighted by Citi News, gives the President the power to dissolve and reconstitute the governing council of a public university in cases of emergencies.

The President is also given the power to appoint an interim council to operate for a stated period.

Mr. Ablakwa views these clauses as a response to President Nana Akufo-Addo’s failed attempt to dissolve the University Council of the Kwame Nkrumah University of Science and dismiss its Vice-Chancellor during the crisis at the school in October 2018.

“Those circumstances as is well known, left the Government with a bloody nose, figuratively, following the bulwark provided by the Chancellor, Asantehene Otumfuo Osei Tutu II with the support of the larger university community in resisting that violent interference after lessons were learnt from Prof. Mawutor Avoke of UEW’s predicament,” the MP remarked.

“This seems clearly to be the immediate cause of Government’s frustration and therefore explains why Government will embark on this reckless, ill-advised and short-sighted intervention to ostensibly create the legal basis for a more lethal come back.”

If the draft Bill remained, the MP said President Akufo-Addo risks being regarded in the same vein as Ugandan dictator, General Idi Amin Dada as far as tertiary education is concerned.

“President Akufo-Addo, respectfully, you do not deserve to be remembered by posterity as the General Idi Amin Dada of university education in Ghana,” he added.

Find below the sections of his statement

REPULSIVE AND CONTEMPTUOUS PUBLIC UNIVERSITIES BILL MUST BE ABANDONED WITHOUT DELAY

I shall now highlight some of the problematic and offensive provisions in the draft bill more specifically:

1) Clause 3(1) which seeks to give the President powers to appoint a majority of five members of a proposed nine member governing council.

This proposal will successfully place the University Councils and by logical extension the entire university under political control. If this is allowed, it will effectively mark the death of the notion of an independent university. Suffice to add that university dons who espouse views which may be at variance with the ruling party risk endangering their academic careers since Clause 5(h) requires the new politically controlled Councils to approve professorial level appointments.

2) Clause 3(5) grants the President sweeping powers to dissolve and reconstitute governing councils at his pleasure in cases of “emergencies.” Perhaps, even more worrying is the fact that the act fails to define what it means by “emergencies” in the interpretation section. This nebulous and amorphous animal called “emergencies” will only create fertile grounds for abuse and a further attack on university councils especially in times when the Government disagrees with a Council decision. The recent KNUST impasse is a classical example. Another point to consider is that Council members will be beholden to the President, living in constant fear of being dissolved or removed much to the detriment of the institutions they serve.

In any case, I would have thought that in times of emergencies – whatever emergencies stand for, the rich wisdom available on the university councils will be relied upon to help the powers that be to overcome such emergencies instead of this indecent hurry to do away with the Councils perhaps in times they are needed most.

3) Clause 24 dangerously arrogates approval of all financial matters in public universities solely in the hands of the Minister responsible for Finance in ways that appear inconsistent with Article 179 of the 1992 Constitution which gives such powers strictly to Parliament.

4) Clause 34 contemplates a Centralised Admission Platform and for which I read in the newspapers some weeks back that a committee has already been set up to recommend modalities for implementation.

This is yet another unwarranted assault on our universities. There is absolutely no basis for wanting to deny public universities their right to conduct their own admission processes and determine for themselves based on merit who they decide to invite into their student fold. The current system of admissions have worked quite well without controversy over the past decades. There is no need for any kind of unsolicited political interference whatsoever in admissions which as we have seen with many of such schemes in other sectors controlled by Government, soon meritocracy gives way to cronyism, clannism and “whom-you-knowism.”

If it is that Government seeks to make policy interventions in the kind of programmes we should prioritise as a nation, the practice has been to establish norms under the auspices of the National Council for Tertiary Education (NCTE) – this practice could be strengthened instead of virtually hijacking the admission process.

Again, learning from history; if the Prof. Kwapong Sub-Committee on Admission Policy in May 1963 rejected similar attempts to interfere with admission modalities as was then spearheaded by the powerful Kojo Botsio who doubled as Minister of Education and Chairman of the National Council for Higher Education, I do not see how the current Government will succeed with this latest attempt. Of course, except if contemporary university management across the country is willing to allow the Government a foothold.

5) Clause 35 envisages that student governance must be restructured to be consistent with provisions of this obnoxious bill. As a former NUGS President, and to the extent that this law flies in the face of the tenets of academic freedom and institutional autonomy, I expect student leaders to appreciate the harm this new law, if passed, will do to the quest for world class academic excellence and its impact on their degrees. This is the time for student leaders to forge strong coalitions with their lecturers and other interest groups to resist oppressor’s rule. Fewer an occasion in the history of the student movement has required defining and decisive mobilization.

6) Clause 36 is perhaps more insulting as it pushes for all public universities to come under harmonised statutes. This attempt to make our public universities glorified Junior High Schools without taking into account their unique missions and social anthropology is most offensive to say the least.

7) Clause 42 presents another bizarre provision which states that: “The Minister may from time to time give policy directives through the National Council for Tertiary Education to the University and the University shall comply.”

This is most unacceptable! Why are we pouring such scorn on our university dons? Enough of the disdain and utter disrespect!

The history of higher education in Ghana teaches us that not all policy directives from Government have been found to be helpful or noble and therefore requiring strict compliance. On 11th April, 1964, a presidential directive setting up an Appointments Committee which demanded that all the university institutions in Ghana use that body for appointment of their staff was politely disobeyed. So was the case when Government in 1977 decided to prematurely retire two University of Ghana Professors of the Medical School in a rather strange development – the university, for good reason refused to comply in an act of defiance worthy of commendation.

If this law is passed, we run the real risk of Ministers of Education who are often activists of political parties making our universities their political playground especially in this era of extreme political polarisation.

I shall conclude with a passionate appeal to President Akufo-Addo to without any further delay withdraw and abandon this repulsive and contemptuous policy. This cannot be a sound policy path for a democrat.

No doubt, the world’s worst tyrant would be jealous of our President if he proceeds on this despotic and inglorious pursuit to assail academic freedom and institutional autonomy in our globally acclaimed and thriving universities.

President Akufo-Addo, respectfully, you do not deserve to be remembered by posterity as the General Idi Amin Dada of university education in Ghana.