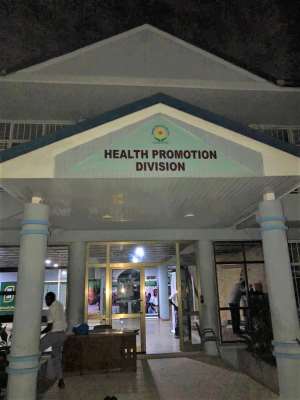 The 9th Global Conference on Health Promotion in Shanghai in November 2016 acknowledged the promotion of health and wellbeing as a central duty and responsibility of governments, shared by all sectors of the society. As the momentum for the Sustainable Development Goals (SDGs) grows, it has become apparent that sustainable structures for health promotion are a key prerequisite for the implementation of the SDGs at local, regional and country levels.

The Ministry of Health (MoH), in partnership with the Ghana Health Service (GHS) and development partners on Tuesday, inaugurated a “Health Promotion Division” in Accra to sensitise the public on the maintenance of good health and prevention of deadly diseases.

The Division, with its new edifice located at the Korle-Bu Teaching Hospital, would, among other functions, promote early preventive strategies, healthy behaviours, and wellbeing, through the creation of environments where individuals, families, and communities would be informed and empowered to live healthy and happier lives.

It is also expected to promote innovations with digital platforms for healthy lifestyles.

The Facility has varied departments including the Advocacy and Social Mobilisation, Health Communication and Education, and Research and Health Policy Departments.

Health literacy, she said, was the ability to gain access to, understand and use the information to promote and maintain good health.

“As complex social and commercial environments are increasingly difficult for people to navigate and manage, it is important to make health promotion a priority,” she said.

Mrs. Mensah noted that health promotion offered a means to achieving the Sustainable Development Goals by equipping and empowering individuals and communities on healthy living, promoting an inclusive model of governance, and advocating healthy public policies and environments.

Promoting health, she said, was not the sole responsibility of the newly created Division and, therefore, called on other divisions under the MoH and the public to support the move.

Dr. Anthony Nsiah-Asare, the Director-General of the GHS, said the country had also witnessed an inevitable rise in the prevalence of non-communicable diseases from lifestyle choices such as physical inactivity, poor diet, and substance abuse.

“There are also neglected tropical diseases and multiple burdens of poverty-related preventable diseases such cholera, diarrheal diseases, malaria, and HIV and AIDS which remain issues of public health concern,” he said.

Dr. Nsiah-Asare said healthcare in Ghana involved curative, promotive, preventive and rehabilitative efforts, however, the nation had focused solely on the curative and preventive care neglecting the others.

Nonetheless, he said, the fact that measles and dysentery cases in children were rarely received in health facilities now, meant the country was doing well in the prevention of those diseases.

The Director-General disclosed that a five-year mobilisation plan to sustain the Health Promotion Division had been developed and efforts were underway to enhance the services of the National Health Insurance Scheme to complement that effort.

He thanked UNICEF and USAID for the support provided for this new division including hiring of an international consultant, Dr Da Costa Aboagye, a lecturer and public health promotion expert who established the implementation plan of the division.

Dr. Owen Kaluwa, the Country Representative of the World Health Organisation, said a strong primary healthcare system, which was the bedrock of Universal Health Coverage, required quality health promotion services as part of the continuum of care.

He said a well-functioning health promotion service was needed to address and mitigate the impacts of determinants of health, biological, environmental, social and economic determinants.

The Health Promotion Service, he explained, should have capacity and mandate to influence policy not only in the health sector but other sectors as well, as most of the determinants were out of the health sector’s influence