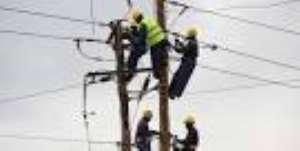 The District Chief Executive (DCE) of West Gonja District in the Northern Region of Ghana, Hon. Saeed Muhazu Jibreal, has said that his office has procured 300 poles to extend electricity to some communities in the District.

Speaking with PAD FM’s Ananpansah B Abraham, host of a weekly political analysis programme,’Within the issues’ Saturday morning,the DCE disclosed that the extension exercise has become necessary due to the many concerns he received from these communities,since assuming office,adding that,the situation of six houses connected to one metre was not pleasant.

The contract which is fully funded from the District Development Fund(DDF) he disclosed,comes in two parts,thus:the supply of electricity poles and stringing of the cables for people to be able to easily tap electricity into their homes.

Poles would be mounted up to points where individuals can easily tap into their homes,instead of going to buy the electricity poles on their own which can be expensive.

“…So,the contract is in two parts; supply of electricity poles and also,stringing of the cables for people to be able to receive their electricity.Then also,we also looking at how other people,because the money is soo small,we can’t string the whole town or areas that we have agreed on to string.So,what we are going to do is that,We are going to mount or put up the poles up to points where transformers or the citizens can easily tap the power on their own,instead of going to buy the poles.You know the poles have become expensive…So what we are going to do is that, we are going to mount those poles,so individuals can easily buy cables in connection with the VRA so that they can get lights into their areas,”he said.

In responding to a question from the host,as to whether areas in Canteen Electoral Area,specifically Sabon Zongo and St.Anne’s were captured,he said some parts of Canteen were due to benefit from the extension exercise.

He revealed that,the reason why the Busunu police station got burnt was due to lack of electricity to the facility,and so the police refused to occupy the building,stating that,electricity would be extended to the facility so Busunu can have a police station on their own.For Laribanga,the extension would be targeted at the new settlements and the area council which is not connected to the national grid.

He brought to bare the unwillingness of the VRA workers to mount some of the electricity poles in the District when there is a problem because, the poles are substandard and could easily break.

These poles he said,were procured under previous regimes and are not too good and so,VRA has refrained from touching those poles anytime there is a problem.About 200 of such poles have been counted and 100 will be replaced for a start.

The next under DDF projects he disclosed,are still the electrification and the construction of a library.The library he said,is going to be a multipurpose library of 120-seater capacity with an office of about 20 computers to be located around the GES District office hopefully…

The existing District library due to its remote location receives very low patronage.

Panelist on the programme agreed unanimously with the host that,there should be considerations to connect all the computers to Internet service so as to enhance research work.