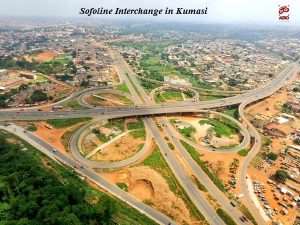 The Kumasi sofoline interchange has now turned into a haven for weeds and squatters as well as hardened criminals.

A visit by the Otec FM’s Evans Agyei Sikapa has revealed that the project and some facilities are gradually becoming a white elephant.

The project which was started by the erstwhile John Agyekum Kuffour’s government in 2008 was to ease vehicular traffic jam on the Kumasi to Abuakwa road and further serve other areas. It however stalled during the reign of the late President John Evans Atta-Mills.

Some residents around the Sofoline project area in an interview expressed their displeasure about how the project has been neglected.

According to them, the site had become a dwelling place for squatters and thieves who rob them at gunpoint, especially in the underground pedistrian crosswalk. The situation, they said had forced them to cross the road at unauthorized places, endangering their lives in the process.

The angry residents are therefore calling on the appropriate authorities to revisit the Sofoline interchange project so that it would serve its intended purpose and save public purse as well.