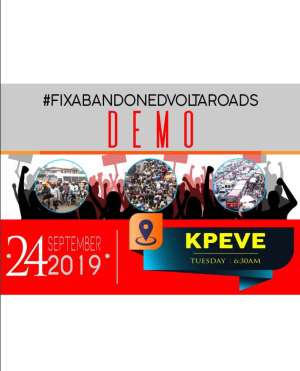 Massive demonstration is set to hit the government in the Volta Region over abandoned road projects by the erstwhile administration by the current government.

It is part of campaign by social groups in the Volta Region dubbed: “Fix Abandoned Volta Roads Campaign” which is scheduled to take place on Tuesday 24th September 2019.

The group in a release said the decision by the NPP Nana Addo-led government to discontinue the contracts is unimaginable. A situation further deteriorating and creating many accidents and discomfort for road users plying that stretch.

According to the group, increased in cost of construction of same roads due to delay will further burden “the poor taxpayer from having value for money.”

With reference to our Release Dated 3rd of September, 2019 asking government to bring contractors to abandoned road sites by 15th September, 2019 which the government has failed to do, we are by this notice inviting the people of the Volta Region and the general public to the “fix abandoned Volta roads demonstration” that will take place on Tuesday 24th September 2019.

This demonstration will mark the beginning of series of demonstrations to be organized wherever there is an abandoned road project in the Volta Region.

Currently in the Volta region, Roads started by the previous government have been abandoned by the current government leading to further deterioration of the roads, increased cost of construction of same roads which is preventing the poor tax payer from having value for money coupled with the many accidents and the discomfort road users have to go through.

We envisaged the participants for this demonstration to be the Driver Unions, Market Women, Okader Riders, the general public and other road users.

The general public is hereby assured that all is set for the demonstration and the attire is an all red outfit, and the place to converge for this peaceful demonstration is Kpeve opposite the lorry park.

The organizers by this notice is also inviting the various media houses to cover this event.

Come let’s put up this fight for our beloved Volta Region.