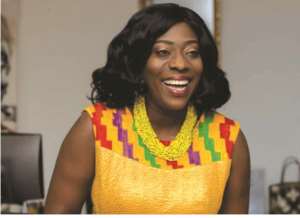 A group calling itself the Voice of Nzema (VON), a socio-political pressure group, has hailed Member of Parliament (MP) for Evalue-Ajomoro Gwira constituency in the Western Region, Catherine Ablema Afeku for chalking successes in government.

This was disclosed to the general public at a press briefing at Half Assini on Friday, October 18, 2019.

Addressing the media, the leadership of the group indicated that despite some few challenges the Akufo-Addo-led government has encountered, the MP has performed creditably.

According to the group, Catherine Afeku being the first person to be appointed as a Minister since 1993, has performed well in areas of Road Infrastructure, Education, Health, Telecommunications Network, Scholarships, Water and Sanitation among others.

Under health sector, they said Catherine Afeku who is a Minister of State at the Office of Senior Office, has done a lot for his Constituents to improve the health sector.

In the area of roads infrastructure, the group applauded the MP for lobbying for so many roads to be done in the area and also for construction of bridges.

The Voice of Nzema also commended her for improving the educational facilities in the area.

In the area of telecommunications network, they said the MP has lobbied for these communities to get access to network. They can now link up with the globe, Bamianko, Dominase, Banso, Assouwua, Eshiem, Kutukrom and Tebakrom.

Under human capacity development, the group disclosed to the gathering that 500 apprentices have been deployed to learn various trades under Catherine Afeku’s ‘Vocational Skills and Training’.

They also disclosed that the MP has constructed seventeen (17) community sheds for social gathering.

Under scholarships, they said apart from the Free SHS flagship program, the MP has given scholarships to some students to further their education at the tertiary levels, both in Ghana and abroad.

They stressed that “We have witnessed the unprecedented jobs and how people’s lives are being changed Excitedly about the future of the country and Nzema at large and that of Nzema children, we’re very much grateful for the recent inauguration of the town guards”.

They concluded, “We commend you and also thank you for the strong leadership you have exhibited since 7 January 2017 till date.

The incredible and remarkable successes chalked by your leadership within the short period bears it all, you deserve second and third time in terms of developmental projects”.

Find below Voice of Nzema’s statement

The Voice of Nzema (VON) has commended Hon. Catherine Abelema Afeku, MP for Nzema East for the impressive work she is doing for communities in her jurisdiction.

We have witnessed the unprecedented jobs and how people’s lives are being changed.

When we see Catherine Abelema Afeku and Frank Okpenyen we see developments.

THE BELOW ARE ACHIEVEMENTS OF HON. CATHERINE AFEKU(MP) AND HON. FRANK OKPENYEN(MCE) SO FAR FROM 7TH JANUARY, 2017 TO DATE

9. Redevelopment of Victoria Park into an Ultra Modern Ceremonial Grounds at Axim

14. Construction of Maternity Ward at Ewoku(Ongoing)

16. Construction of CHP Compound at Egyan/Akonu

18. Construction of Fence Wall and Renovation of OPD at Gwira Banso Health Centre.

19. Construction of Community Clinic at Apataim

21. Construction of the State of the Art Cassava Processing Factory at Bokro(ongoing)

25. Renovation of Community Bridge at Ambganzie

26. Construction of Community Bridge at Asantekrom

29. Construction of borehole at Aguafo(ongoing)

30. Construction of borehole at Bokro(Ongoing)

31.Construction of borehole at Anibil(Ongoing)

34. Construction of a 2-unit Classroom Block for Alasuna Basic School at Axim

37. Construction of Teachers Quarters at Kukuavile

42. Given Educational Scholarship to many students by the MP to study various courses both home and abroad

47. Renovation of a 6-unit Classroom Block at Kukuavile

76. 500 Apprentices have been deployed to learn various trades under MP’s Vocational Skills and Training.

78. Construction of Public Staircase at Bolazo

79. Renovation of Tomb and Graveyard of George Alfred Grant

80. Renovation of Public Staircase at Amofukumanu

82. Gravelling of Courtyard and Tiling of Ghana Police Service Office Complex at Axim

83. Supply of Office Furniture and Equipment for Ghana Police Service at Axim

84. Construction of 27-unit Workshops and 16 Lockable Stores at Ayisakro

85. Extension of Electricity to Workshops, Stores and Connection of Network to National Grid at Ayisakro

86. Distribution of Local FMs to 12 Communities

87. Furnishing all CHP Compounds in the constituency

89. Completion of Basement of Assembly Hall Complex at Axim

96. Recruitment of people into the Local Government Services

98. Distribution of MASLOC Loans to 225 women

We commend you and also thank you for the strong leadership you have exhibited since 7 January 2017 till date. The incredible and remarkable successes chalked by your leadership within the short period bears it all, you deserve second and third time in terms of developmental projects.