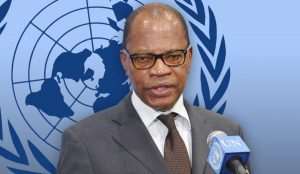 Dr Mohamed Ibn Chambas, the Special Representative of the United Nations Secretary-General and Head of the United Nations Office for West Africa and the Sahel (UNOWAS), said the UN would remain at Ghana’s disposal to facilitate national conversations as a means to responding to the issue devoid of partisanship.

He said the UN remained committed to lending its support to the ongoing national efforts, led by the National Peace Council, to address political vigilantism and expressed the hope that all parties would participate in reaching a consensual agreement to comprehensively address the phenomenon.

Dr Chambas made the remarks in a presentation at the Council on Foreign Relations Ghana’s second distinguished guest series public lecture in Accra.

He spoke on the topic: “An Agenda for Building Partnerships for Peace in West Africa and the Sahel: Challenges and Opportunities.”

Dr Chambas noted that political vigilantism, as demonstrated during the parliamentary by-election in Ayawaso West Wuogon, earlier this year, illustrated two main issues with regard to peace.

The first was the importance of the political economy of peace, which was not sustainable within a broader context of economic polarisation and inequity.

The second major issue was the need for partnerships in addressing the phenomenon, which was multidimensional in both cause and effect.

Dr Chambas said one in five Ghanaians lived in poverty; more than a quarter of Ghanaian children (28 per cent) live in poverty and that one in eight Ghanaians live in extreme poverty.

He said this run counter to the collective vision as a country and the commitment to the Sustainable Development Goals (SDGs) and other development objectives.

He said the net result was an available cadre of Ghanaians, who had become economically disenfranchised and vulnerable to political manipulation.

He called for national efforts involving multiple partnerships of the Government, political parties, security agencies, the judiciary, the media, communities, civil society, traditional and religious leaders and national and sub-national institutions to find solution to the menace.

“In the current environment, the nation should consider triggering the entire instruments within the national peace architecture to address the challenges of political vigilantism in Ghana, beyond legalistic approaches,” he said.

“I should commend the initiative of President Nana Addo Dankwa Akufo-Addo, of former President John Dramani Mahama and their political parties, to work collaboratively to bring to an end the phenomena of vigilantism before it turns into a monster that can no longer be controlled…..to destroy the reputation of Ghana,” he added.