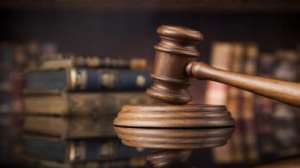 Two suspected armed robbers have been jailed ten years by a Circuit Court in Agona Swedru prseided over by Justices Mrs. Patricia Quansey.

The two pleaded guilty and the court convicted and sentenced them on their own plea.

In an interview with the Ghana News Agency, Assistant Superintendent of Police Mr. Oppong Agyekum who is the Crime Officer in charge of the Winneba District Police Command, said the complainant is one Emmanuel Aklinu a National Service person who resides at Ateitu a suburb of Effutu, while Bonney, 27 lives at Sankror a community in Winneba and Koranteng, 19 lives at Kasoa, both unemployed.

According to him on 20th October, 2018 at about 2300 hours the complainant was returning home from the University of Education, Winneba North campus but on reaching a section of the road leading to Ateitu Township, the convicts who had laid ambush on the road attacked him.

ASP. Oppong said that after the act both convicts escaped into the bush. He said the complainant left the scene and reported his ordeal to the Chief of Ateitu who is also the Effutu Branch Chairman of the Ghana Private Roads Transport Union.

He said the Chief quickly mobilized the youth of the community to the vicinity in search of assailants.

The Crime office said about an hour later the two convicts return to the scene which led to their arrest.

He said the complainant came and identified them as his assailants and in their respective investigative cautioned statement they admitted the offence.

Mr Agyekum said after investigations they were charged with the offences.