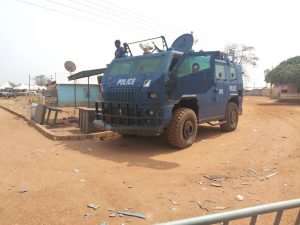 Two persons have been confirmed dead following bloody clashes between woodworkers of Ayomso and Akrodie in the Asunafo North Municipality of the Ahafo Region.

Kofi Gyamfi, 27, and David Asuming, 24 both sustained gunshot wounds and were pronounced dead on arrival at the Goaso Government Hospital and the Komfo Anokye Teaching Hospital in Kumasi respectively.

About 13 others, including a 12-year-old boy, have been hospitalized at different health facilities after sustaining varying degrees of injury as a result of the clashes.

The Assembly member of Ayomso, Emmanuel Ababio Yeboah who confirmed this to Citi News believes the clashes was linked to an attack on a chainsaw operator weeks ago.

“It started when some illegal chainsaw operators went into a forest reserve near Tipokrom where a man called call Zedane from Akrodie had his concenssion to operate. During their operation, Zedane came there and seized their machine. When Zedane was returning home, people in Ayomso mounted a road block and attacked him with cutlasses, took back the machine and left him injured. This happened about three weeks ago and the matter was reported to the police but they didn’t act by arresting the culprits hence the revenge yesterday, June 14,2019.”

The Assemblyman said Zedane and his people were not happy that the culprits had not been arrested.