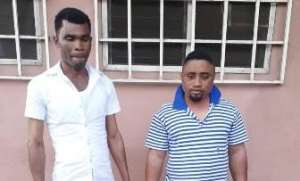 The Makola Division of the Ghana Police Service has arrested Amos Debi and Emmanuel Nartey for allegedly engaging in electricity fraud.

Their arrest follows a report made to the Police by officials of the Power Distribution Services (PDS) Ghana Ltd, according to an official statement issued to the Ghana News Agency on Tuesday.

Narrating the details of the case, the Acting Accra West Regional General Manager of the PDS, Engineer Ankomah Emmanuel, stated that while on routine monitoring of domestic electricity installations of some customers, their staff came across two electrical power meters in a house, whose records could not be traced in the Company’s system.

The meters were thus identified as stolen from their original users.

Upon further investigations, the team realised that these meters had been illegally loaded with pre-paid credits with a “master card”; such that it made it impossible to purchase pre-paid credits.

Upon interrogations and a search of Debi’s residence, the MasterCard was found hidden in a bag.

In his caution statement to the Police, Debi admitted the offence and mentioned Nartey, a resident of Mamprobi Kamara, as the source of the meters and card.

He revealed that he charged the customer a fee of GHC 30.00 to load their meters with credit worth GHC 50.00.

Following his arrest, Nartey was identified as a former worker of the B.O.T Electrical Company, which operated a meter operating contract with the Electricity Company of Ghana Ltd. (ECG).

He revealed that when the contract between ECG and the B.O.T ended, he retrieved the MasterCard and meters from the BOT Company before their final departure to China. The two have since been arraigned at the court.