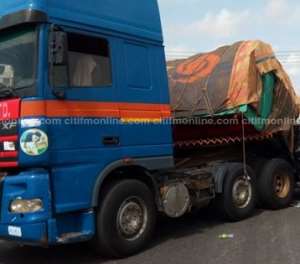 A Tipper truck fell on a pregnant woman killing her and her unborn baby instantly at Chiraa in the Sunyani West District of the Brong Ahafo region.

Two other victims, Madam Akua Denkyiwaa, aged 55, and Richmond Mohammed, a five-year old boy who were injured in the accident are responding to treatment at the Sunyani Regional Hospital.

The body of the pregnant woman and the premature baby have been deposited at the Hospital’s Mortuary, pending autopsy.

The vehicle with registration number GW3951-14, driven by one Issifu Tahiru , with one Ali Fatawu and Benjamin Yiadom on board, was returning from Techiman and heading towards Sunyani when the accident occurred.

Chief Inspector Augustine Kingsley Oppong, the Brong-Ahafo Regional Police Public Relations Officer who confirmed the incident said the tipper truck developed a mechanical fault and fell on its side to hit the pregnant woman who was selling by the road side and killed her instantly.

The vehicle has since been towed to the Chiraa Police Station, while the driver has been arrested to assist the Police in their investigation.