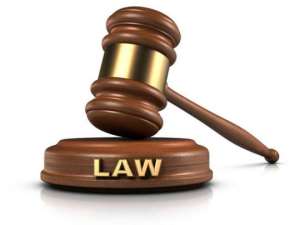 Michael Mensah, a Mechanic who allegedly threatened to kill two police officers and a court bailiff in their attempt to execute a court order, is at the wrong side of the law.

An Accra Circuit Court has granted him a bail in the sum of GHC10,000.

He has denied all the charges and would make his next appearance on December 19.

He said Mensah lived at Alobloshie-Achimota in Accra.

The prosecution said on November 21, this year, General Sergeant Yeboah, Corporal Justice Adjei and Constable Shuaib Hamid were detailed to give protection to one Nana Michael, a bailiff to execute a court order (Writ of Possession) at Alobloshie-Achimota.

He said when they got there and was about to execute the order, the accused person appeared and asked the bailiff not to carry out the order.

Chief Inspector Tassan said he then threatened them saying, ‘Someone will die here. If any of you touch anything here. I am a killer’.

He said, Mensah became aggressive and assaulted Corporal Adjei and Constable Hamid who tried to calm him down.

The Prosecution explained that accused hit the left cheek of Corporal Adjei and tore Constable Hamid’s uniform without any provocation, and hit them when they attempted to arrest him.

He said the officers later overpowered him and handed him over to the Regional Police Criminal Investigations Department for further action since in view of the development the court order was not executed.

He admitted the offence and pleaded for forgiveness in his caution statement.