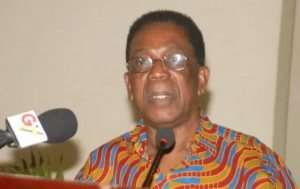 The Minister of State in Charge of Tertiary Education, Professor Kwesi Yankah, has allayed the fears of Ghanaians who are anxious about the introduction of the ‘Double-Track System’.

He has thus urged Ghanaians to remain calm since the policy has come to ensure that every qualified Ghanaian student is granted access to secondary education.

“This policy is in no way a signal that the Free SHS Policy is in tatters or has suddenly been put in reverse gear. No. Just as the Free SHS Policy in its first year enabled 90,000 extra students to go to high school, double-Track Policy is trying to rescue some 180,000 students whose educational future could be curtailed or jeopardized,” he said.

Professor Yankah was speaking at the 10th graduation ceremony of the George Grant University of Mines and Technology at Tarkwa in the Western Region, where he further mentioned that the ‘Double-Track System’ was the only available option to deal with the pressing national educational crisis.

“Government is simply saying, ‘these boys and girls are stranded. Let’s be creative and rescue these kids at a critical part of their lives. Instead of using classrooms for only a part of the year, why don’t we optimize the use of space by treating that part, and while the classrooms and other facilities lie idle, another batch comes in.’ It simply says, let’s not waste underutilized space while kids are stranded. Let’s use space wisely by taking turns to use the same space,” he opined.

The Double-Track System, since was announced in July 2018, has had its fair share of criticisms and recommendations from policymakers and ordinary Ghanaians alike.

The popular criticism has however been the supposed inability of the government to consult all relevant stakeholders ahead of the adoption and drafting of the policy.