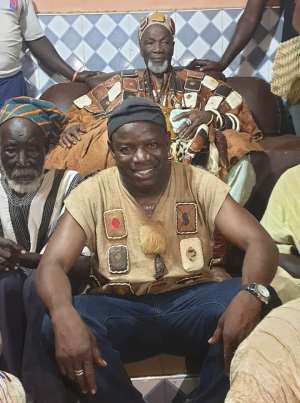 The Northern Regional Minister, Hon. Salifu Sa-eed celebrates the 2019 edition of the annual Fire Festival. Hon. Salifu Sa-eed joined the overlord of Dagbon, Ya-Na Abubakari Mahama II at the Gbewa Palace at 8pm to commence the celebrations. The Northern Regional Minister was received by the MCE for the Yendi Municipality, Hon. Alhaji Hamid Abubakari Yussif.

The Fire Festival is celebrated to mark the beginning of a new year. It is observed by many ethnic groups in northern Ghana and also among Muslims.

Hon. Salifu Sa-eed used the occasion to explain some government policies to the teeming youth who took part in the celebrations.

He expressed the government’s appreciations to the people for the peaceful atmosphere during the festival. He also encouraged the youth to avail themselves for the numerous programs being implemented by the government.

The Northern Regional Minister expressed a high degree of optimism in the development of enterprises in the region and assured investors of security. ‘I want to assure all investors that Northern Region is ready for industrialization and the people are hungry for development’, he added.

The minister also encouraged investors to tap into the vast resources and business opportunities in the region.

This year’s celebration consolidates the peace in the Dagbon Kingdom as it marks the first Fire Festival after the investiture of the overlord early this year.