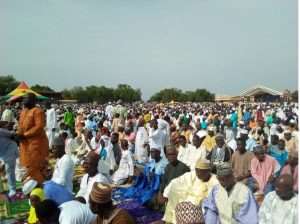 There was some confusion at the Hajj Village in Accra on Saturday morning as prospective pilgrims travelling to Saudi Arabia demanded answers from the Hajj Board over delays in their flight.

The pilgrims, who were supposed to be airlifted that Saturday morning vented their frustrations on the Hajj Board with some accusing Board members of incompetence and lack of proper planning.

The situation has since not been solved, as the Board could not charter a bigger aircraft to airlift the pilgrims to embark on the pilgrimage. Additionally, no information has been communicated to the prospective pilgrims, as they have remained in darkness for the past five days.

The Board, instead of contracting a bigger airplane which could fly about 506 passengers on a single manifest as done by the previous regime, opted for a 174-passenger aircraft for this year’s operations.

The Board also requested Saudi Authorities to reduce Ghana’s quota of 6,700 pilgrims to 5,500, which created a lot of tension within Hajj Agents and prospective pilgrims.

This has compelled some of the Agents travelling as far as to Nigeria to seek consideration from partner Agents for their passengers to embark on the Holy Journey.

Some elite passengers (names “withheld”) accused the Board of favouring market women who are embarking on the trip for commercial purposes and not for prayers (Pilgrimage).

The accusations started when the passengers saw their names on the manifest and checked-in their luggage, but were later dropped in favour of the business women.

The passengers called on President Nana Addo Dankwa Akufo-Addo to dissolve the Board as soon as possible to protect the government’s credibility within the Muslim circles, as some Muslims have started blaming the government for lack of dedication to the Muslim community.

Many of the passengers who are known to the Board members pointed fingers at the Chairman of the Hajj Board, Sheikh I.C. Quaye; Directory of Finance, Alhaji Umar Farouk; and Director of Operations, Alhaji Sumaila, of being the cause of the mess.

They noted that the gang of three have hijacked the Board by taking the role of all Board members which has been too much on them. This has been a big disgrace to the government of President Akufo-Addo, Vice President Mahamudu Baumia, Sheikh Imam Osmanu Nuhu Sharubutu, and the entire Ghanaian Muslim community, they added.

Explaining the reason for the flight delay, a member of the Board and some members of the Hajj Agents’ Association who spoke on condition of anonymity, reiterated the passengers’ call on the President to dissolve the Board to save Ghana’s international image.

The Board unilaterally set June 30, 2018, as the deadline for payment, but stopped receiving payment on June 26, 2018, without any communication to the Association, they agents revealed.

The 2018 Hajj officially begins from Sunday, August 19 to Friday, August 24, with three million Muslims expected to gather in the Holy City of Mecca, Saudi Arabia.