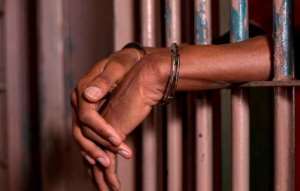 He was said to have robbed one Dorcas Berko of her Samsung Galaxy S8 and a hand bag containing an amount GH¢ 50.00, phone charger and a dress.

He pleaded not guilty to the charge and was remanded by the court to reappear on May 9.

The facts of the case as presented by Police Chief Inspector Kwabena Adu was that the complainant Dorcas works with a treated water company as a factory hand and live at Dome whilst the accused also live at Dome.

He said on April 23, at about 05:00 hours, the complainant was walking along a street at Dome to work when she realized that the accused was following her.

She became scared and therefore doubled her steps, however the accused quickened his pace and caught up with her.

The prosecution said he suddenly crossed the complainant, pulled out a knife and threatened her to surrender her phone and hang bag.

The complainant out of fear handed over her Samsung Galaxy S8 phone to the accused but decided not to hand over the bag.

The complainant saw a lady sweeping in a nearby house and decided to run for rescue.

He told the court that the accused held on to the hand bag and complainant fell down,, he then started giving complainant blows and succeeded in snatching the hang bag containing, the above listed items.

Mr Adu said the lady who was sweeping spotted the incident and raised an alarm. Her shouting attracted people to the scene and accused sensing danger took to his heels with the booty.

He was given a chase and arrested at a distance. All the exhibits together with the knife were retrieved from the accused.

He was handed over to Police together with the exhibits and a formal complaint was made.

The prosecution said Nii admitted the offence in his caution statement.