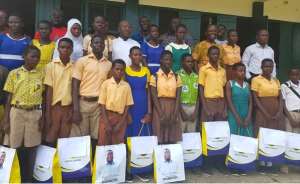 FORMER CENTRAL Regional Youth Organizer of the New Patriotic Party (NPP), Francis Ejaku Donkoh, has advised pupils in the Saltpond locality in the Central Region to learn hard and take advantage of the free senior high school policy introduced by the Akufo-Addo government.

He made the call at the end of month-long extra classes for the pupils in the area, saying “even though senior high school is free, if you do not learn hard you won’t get placement in the first-class schools”.

In his closing remarks, Mr. Donkoh thanked the teachers for their sacrifices during the one month.

He used the opportunity to express his appreciation to the Municipal Director of Education for Mfanstiman, Martha Acquah, for her support.

He pledged his continued support to the Municipal Education Directorate and hoped that his intervention would put Saltpond on a higher pedestal.

Mr. Donkoh bemoaned the fallen standards of education in Saltpond and indicated that he sponsored the vacation classes because there is an urgent need to help raise the standard of education in the area.

“I hope with this intervention, by the next five to 10 years, Saltpond will produce students who will aspire to the level of Prof. Yaw Gyampo, the late Prof. Allotey, and many others.

The classes which started on 30th July, 2018, were organized by Mr. Donkoh with the support of the Mfanstiman Municipal Education Directorate.