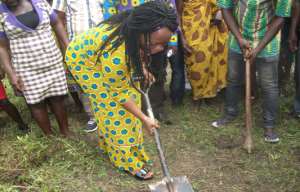 The project which will be founded by the Tain District Assembly through the District Development Funds (DDF) is expected to be completed within 4 months. The new block when completed will have 35 dual desks in each class and a four seater toilet facility for the school.

Mr. Eric Mensah, Head Teacher of the school who expressed his joy for the project also appealed to the DCE for the primary level to also be considered since it’s also not in good conditions. According to him, the primary level is currently having over 500 pupils.

According to the DCE, the current classroom block being used served as a disincentive to pupils to attend school, because it looks humiliating and scares the pupils due to its condition.

She said, so far a number of poor school infrastructures, bad road network across the district, electricity extensions, lack of police post at most of the communities, and among others had been identified all over the district which efforts would be made to resolve.

Madam Charity Akua Foriwaa Dwommoh assured the chiefs and people in the Tain District of government’s determination to help bring the needed development to them.

Mr. Isaac Manu Kwaku, the presiding Member of the Assembly appealed to the community to support and collaborate with the contractor for the project to be completed within the stipulated period.

The occasion brought together Assembly members, Staff and Management of the Assembly, Nananom and the general public.