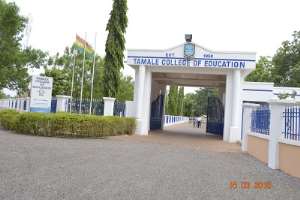 The Tamale College of Education (TACE) on Saturday April 13, 2019 held a graduation ceremony for Trainee students who successfully completed their course of study from the college

Speaking at the ceremony, Chief Executive Officer (CEO) and Principal for the college Dr. Iddrisu Suleinama lamented over inadequate infrastructure faced by colleges of education

He said every year colleges of education, especially, the Tamale College of Education (TACE) turns down thousands of application not because they are not qualified, but due to infrastructure deficit

He revealed that, in 2018/2019 academic year alone, the Tamale college of Education received a total of 1086 applications made up of 732 males and 355 females applications who were seeking admission, but could only admit 543 comprising 353 males and 206 females, turning down 50 percent of the total applications who applied for admission to the college. And appealed to government to provide colleges of education with more infrastructure so that they can meet admission demands by qualified candidates who seek admissions to the schools yearly

The principal also mentioned denial by the government, ministry of finance and education to allow colleges of education recruit more tutors to replace retired ones,this he noted has resulted in inadequate tutors in the schools thereby affecting teaching and learning

He advised the graduands to add value to their certificates, noting that,graduation does not marks end of education, but the rather a step to another journey

Minister of State in charge of Tertiary Education, Professor Kwesi Yankah on his part said Ghana as it stands now needs teachers who are innovative, creative and ethical in their line of duty

According to Prof Yankah, teaching is about moulding characters and adding values to the lives of children who are the future leaders of the nation and therefore need persons who are very committed, creative and moral sound to be able to restore morality and instil self-discipline in the children they handle

He noted that, before a teacher can be more effective and relevant, then, teachers need to always abreast themselves with the current trends in the educational sector and the demands of the 21st century on education

He also urged trainee teachers to be good role models for children to emulate because, children sees teachers as their everything and wants to be like them

“But crucial to all this is the issue of teacher responsibility. Indeed, from time immemorial, the teacher has been the child’s role model: his or her be-all and end all whose life she emulate” he stated

He debunked claims that, government was trying hard to take over universities in the country

According to the Professor, what government seeks is to facilitate the creation of a unified platform to be operated by universities in the country to cure the avoidable inconsistencies in university governance and responsibilities universities expects to shoulder in executing their mandate