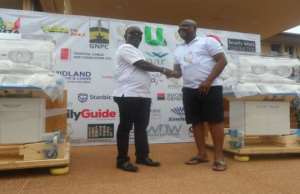 The Kokrokoo Charities Foundation, an Accra-based charitable organisation, on Saturday presented two incubators at 10,000 dollars each to the Sunyani Regional Hospital at a short ceremony in Sunyani.

Speaking to the media after the presentation, Mr Dennis Adutwum, Programmes Director of the Foundation, said so far 19 incubators including the two for the Sunyani Regional Hospital, which were procured from Germany, had been presented to selected hospitals across nine regions of the country.

The beneficiary hospitals include Cape Coast, Ho and Efiah-Nkwanta Regional hospitals, he said, and that the next in line would be Atibie Government Hospital in the Eastern Region and the 37 Military Hospital in Accra.

Mr Adutwum said the Foundation decided to embark on the incubator donation project, among other objectives, because Ghana had a record of 140,000 pre-term births with more than 8000 dying due to inadequate or unavailability of incubators in the hospitals.

Dr Emmanuel Kofi Amponsah, the Medical Director of the Hospital, who received the incubators on behalf of Management and staff, expressed gratitude to Mr Kwame Sefa-Kayi, the Founder and Chief Executive Officer of the Foundation, for the presentation.

He said the Hospital now had six incubators, which hitherto had only four, with each taking three or four per-term babies at a time.

Dr Amponsah said four more were, therefore, required immediately to increase the number to 10 to enhance the survival rate of pre-term babies at the Hospital and Brong-Ahafo in general.

He appealed to other charitable organisations, corporate bodies and philanthropists to emulate the effort of the Foundation.