The National Ozone Office of the Environmental Protection Agency (EPA) sensitized students of selected Senior High Schools across Ghana on Ozone depletion, its causes, effects and the need to protect the Ozone Layer. The school sensitization programme, which was climaxed in Takoradi, in partnership with the United Nations Development Programme (UNDP), marked the end of Ghana’s celebration of the 2018 International Day for the Preservation of the Ozone Layer under the theme “Keep Cool and Carry On”.

Taking the students through the Science of Ozone Layer Depletion Phenomenon and Its Effects on Humankind, Mr. Emmanuel Osae-Quansah, National Coordinator of the Montreal Protocol Implementation Programme (National Ozone Office) at the EPA emphasized that the event was in line with efforts being made under the Montreal Protocol, which is an international treaty to protect the Ozone Layer. The protocol, which Ghana has ratified, aims to phase out the production and consumption of ozone-depleting substances (ODS) including chlorofluorocarbons (CFCs) and hydrochlorofluorocarbons (HCFCs) used as refrigerants in refrigerators and air-conditioners, as well as halons used in fire extinguishers.

Mr. Osae-Quansah called on the students to sensitize their parents and others on the need to always check and ensure that Technicians use ozone friendly refrigerants such as hydrocarbon refrigerants (for instance R600, R600a, and R290), which are natural refrigerants and internationally accepted. The students were also urged to avoid excessive sun exposure to protect themselves.

“Ozone Depleting Substances like HCFCs and CFCs used in appliances such as refrigerators and air conditioners cause damage to the Ozone Layer & expose us to ultraviolet radiations from the sun. This is harmful for the environment and for our health since it can cause diseases like skin cancer and blindness, hence the need to phase them out to help the Ozone Layer recover”, noted Mr. Osae-Quansah.

Similarly, in a presentation on the linkages between climate change and ozone depletion, Mr. Joseph Baffoe, Senior Programme Officer at EPA underscored the need for behavioural changes to reduce emissions of excessive greenhouse gases. These behavioural changes, he said must involve the replacement of incandescent light bulbs with florescent ones, old refrigerators with new efficient ones with energy star label, switching off lights and appliances not being used, and keeping air-conditioners filters clean regularly. The presentations also took the students through proper handling and use of refrigerators.

The 2018 International Day for the Preservation of the Ozone Layer was used to sensitize 1400 second cycle students from 21 senior high schools in Koforidua, Kumasi and Takoradi.

The sensitization falls under two projects entitled ‘ Hydrochlorofluorocarbon Phase-out Management Plan (HPMP) for Ghana ’ and ‘ Institutional Strengthening on ODS ’. These are being implemented by EPA and UNDP to phase out the use of ozone depleting chemicals in Ghana. The HPMP project has so far established 3 Centres of Excellence in Refrigeration and Air Conditioning at the Accra Technical Training Centre, Takoradi Technical Institute and the Kumasi Technical Institute where refrigeration technicians are being trained on best practices in refrigeration using acceptable hydrocarbon refrigerants. The projects have also built the capacity of customs officials at the ports and borders to identify and isolate unacceptable imported refrigerants. 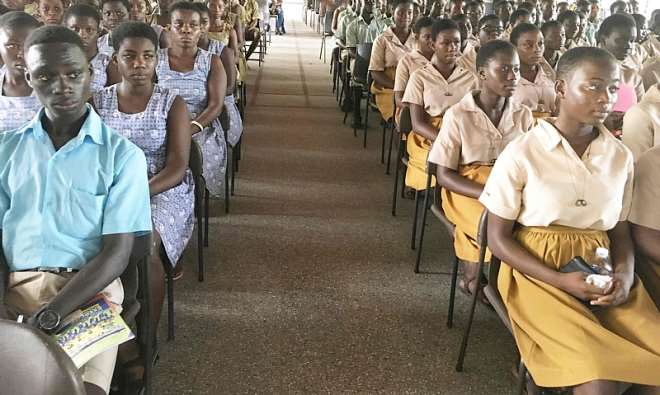