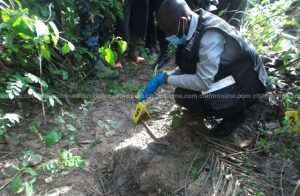 An unknown assailant has shot and killed a woman and injured another in an attack in the Alavanyo town of Deme in the Hohoe Municipality of the Volta Region.

The deceased, Atta Yaw Rejoice, a woman in her early 40s, was returning from the farm when she was shot at the entrance to her house, according to eyewitnesses.

The incident occurred on Monday evening in the troubled area.

The other victim, an 80-year-old woman, was also hit by the bullets but survived and was rushed to St Margaret Marquette Catholic Hospital at Kpando for treatment.

The assailant reportedly fled into a nearby bush.
The Assemblyman for the Area, Raymond Chorkor, who earlier confirmed news of the attack to Citi News, said the police and the military were at the scene investigating.

The Monday attack followed the recently alleged abduction of an Elder from the Alavanyo dynasty, who had gone missing during their festival.

Alavanyo has been home to similar acts of violence typically attributed to the protracted land dispute between it and the nearby Nkonya traditional area.

However, security personnel have advised that such incidences be decoupled from the land dispute.

They argue that the crimes must be treated in isolation, investigated and perpetrators dealt with.