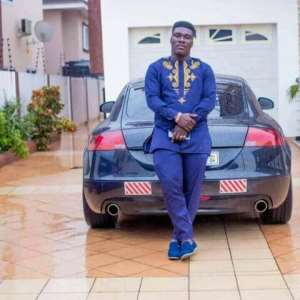 Land ownership continue to remains a societal problems that will forever be with us as long is we stay in this world.

Noted for its long and protracted nature, the issue of Land Ownership has been given both traditional and judicial face as seen in the documentation.

Mr Samuel Larbi Darko, a legitimate owner of a portion of Land located at Mempeasem now, seems to be suffering from same feat others are suffering – wrongful owners are claiming ownership of his land.

Dating back to the early 70s, the said piece of Land was given to government by the Executive Instrument(E.I 72 of 1974) who acquired the land for the construction of the Accra Training College (ATTRACO).

The Land which was Given To the Numo Nmashie Family and the Djrasee family as compensation by the government was sold to Mr. Samuel Larbi Darko by the family.

Captain Budu Koomson during the press conference mentioned One Daniel Laryea as a land guard. Checks however proved otherwise.

But the land in question was not used and duly returned to its rightful owners on Thursday, December 16, 2008 as per the attached documents.

Confirming the legal documents, The Numo Nmashie family of Teshie and Labadi And Djrasee family endorsed the power of Attorney in reference to this case.

This follow up was done after the President of the Mempeasem residents association Captain Budu Koomson who have been sued by Mr. Samuel Darko and his members had a press conference at pekan hotel on Saturday 26th of May,2018.

Captain Budu Koomson is quoted to have said that he knows some big men in the ruling new patriot party and has been threatening Daniel Laryea and Mr. Samuel Larbi Darko.

On 26th June, 2014 One Mr. Charles Owusu Ofori wanted to applied for land title certificate on some part of the land with lodgement No. 002330/13 and later the then Assistant Registrar Of Lands For:Regional Head Irene Kafui Doe wrote back to Mr Ofori asking to go to the rightful owners of the land.

Madam Irene in her letter to Mr Charles stated that the lands commission were unable to continue the registration as the land Mr Charles Owusu was seeking to register falls within an area released by the government of Ghana in favour of the Djrasee family and Numo Nmashie Family Of Teshie And Labadi.

Since your indenture emanated from Nii Sodjah Obodai of mpehuasem, you are requested to perfect your title by obtaining a conveyance from the rightful owners said by Madam Irene Kafui Doe in her letter to MrCharles Ofori.

It took Mr. Samuel Larbi Darko about four years before his land certificate was processed for him at the Land Title registry. They residents have refused an olive branch extended by Mr Darko for regularization.Mr Darko has taken the residents to court but instead of responding to his suit they have rather resorted to a press conference which is an abuse of the court process.

Mr Darko did all the due diligence at Lands Commission before he purchased the land and has constantly been harassed by Capt Budu Koomson and the residents by Police, Soldiers and Land Guards.