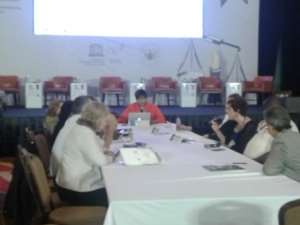 Panellists at a roundtable discussion on ensuring effective safety protocols for journalists at the World Press Freedom Day have underscored the need for media owners and Managers to offer safety tit bits to journalists before assigning them.

He said covering of risky assignments or conflict areas was unique and therefore deserved ample protection for Journalists.

They said the safety training should not be a one-off thing, but a continuous process, adding that where the senior editors lacked knowledge in safety protocols, security experts should be contracted to offer such training to journalists.

They said in situations where junior reporters had been affected and suffered abuses from officialdom or security agencies, the Management of those media houses and journalists associations should assist them to seek justice and adequate compensation.

They said although the journalist may have committed professional breaches in the line of duty, she or she should not be left to his/her fate to suffer and called for solidarity.

The discussion was moderated by Ms Rosiland Jordan, Al Jazeera Correspondent on US State and Defence Departments.

‘Keeping Power in Check: Media, Justice and the Rule of Law’ was the theme chosen for this year’s celebration of the World Press Freedom Day, which was jointly organised by the Government of Ghana and UNESCO.

It afforded a platform for stakeholders to remind governments worldwide on the need to respect freedom of expression and ensuring the sanctity of journalism practice.

Mr Henry Maina, a panellist who is the Regional Director of Article 19 in East Africa, bemoaned that a lot of journalists in Africa and other jurisdictions were physically attacked, intimidated, arrested and detained, while a number of them paid the ultimate price by being killed for performing their work.

This, he said, often occurred because most media houses in Africa did not have safety protocols and ”so journalists are sent on assignment without proper understanding of the risk of that assignment’.

Mr Maina noted: ‘If there is an understanding of that assignment, journalists are not given sufficient back-up in terms of body armours or any other necessary equipment that will help them in the event of danger’.

He condemned situations where media managers and senior editors failed to offer immediate support to journalists who got caught up in crossfire and maimed in line of duty.

He underlined the need for media managers to always show solidarity to journalists who fall victim to brutalities, noting that, when victims were left to their fate, it exposed journalists to more attacks and emboldened their attackers to constantly attack them.

Mr Maina noted that journalists that investigated corruption cases and followed political events often suffered attacks; therefore, there was the need to offer those journalists safety protocols to safeguard them.

The 2017/2018 Global Report dubbed: ”World Trend of the Freedom of Expression and Media Development” revealed that 530 journalists were killed between 2012 and 2016, and averagely, two journalists killed each week globally.