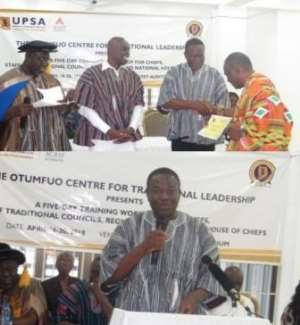 He said the college would enhance the knowledge of traditional rulers of the laws that guide the chieftaincy profession, while giving them the leadership training they need to perform better in their communities.

He said the Chieftaincy Ministry would collaborate with the UPSA in this enterprise to build stronger chieftaincy institutions.

‘We would welcome suggestions as we develop the framework and curricula for the institutions of a Royal College for Traditional Authority,’ Mr Dzamesi said in Accra at the weekend during the closing ceremony of a five-day workshop for paramount and divisional chiefs, queenmothers and staff of Traditional Councils, Regional and National Houses of Chiefs.

It was organised by the Otumfuo Centre for Traditional Leadership (OCTL) at the UPSA and participants were taken through Land Administration and Management, Conflict Resolution and Gender issues.

The OCTL, which is one of the four centres of excellence, was established by the UPSA to spearhead the development and modernisation of the chieftaincy institution.

Mr Dzamesi said the training programme would go a long way to give the chieftaincy institutions knowledge on the methods of control, management and leadership to make a greater impact on the country’s development efforts.

‘We acknowledge the strength and spread of chieftaincy. We acknowledge that chiefs and queenmothers play very diverse roles in society and they are a fulcrum for galvanizing human resources for development,’ he said.

‘Chiefs and queenmothers are innovators and Mentors. In my opinion, we need to have a robust and resilient chieftaincy institution, one that is responsive to change and positioned to make critical interventions in our society.’

Mr Dzamesi noted that a chief should be seen as a leader in all dimensions; ‘a person who is able to influence change and stimulate development’.

‘I am quite certain that some negative associations with the chieftaincy institution should not be taken as negating the enormous benefits that the institution gives to society,’ he said.

Mr Dzamesi said the Chieftaincy Ministry had developed a code of ethics for chiefs and queenmothers, which would serve as a guide to their activities.

Professor Abednego Feehi Okoe Amartey, the Vice-Chancellor of UPSA, urged the traditional rulers to become brand ambassadors of UPSA’s OCTL and promote its laudable mission in their activities to build peaceful and prosperous communities.

Nana Kobina Nketsia V, The Paramount Chief of the Essikado Traditional Area, who chaired the function, said: ‘No nation in this world grows except on its traditions. It’s traditions that power the development of any nation. Traditions are the values that the society holds dear.’

He said as soon as a nation got off its tradition, it became like a ship just being tossed up and down on the sea.

Lepowura Alhaji Mohammed Nurudeen Dramani Jawula, the Director of OCTL, said the time had come for the state to ensure that traditional boundaries were properly demarcated and what pertained there.

Nana Otubea II, the Queenmother of Nkonya Traditional Area, a participant at the workshop, in an interview with the Ghana News Agency, lauded the National Peace Council for promoting peace in her traditional area.