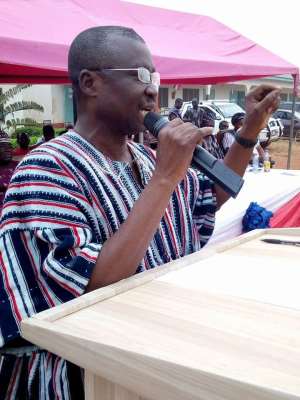 There is a wave of social media and radio protests over the appointment of Mr. Samuel Yeyu Tika, as Deputy Minister of the Savannah Region.

The Member of Parliament (MP) for Salaga South Hon Salifu Adam Braimah, Mr. Samuel Yeyu Tika have been appointed as the Minister and Deputy Minister-designate for the Savannah Region respectively by President Nana Akufo-Addo.

However, Samuel Tika who was the NPP parliamentary candidate for the Daboya- Mankarigu Constituency (North Gonja District) seem to be facing opposition from many people. He has been accused of not taking part in activities leading to the referendum for the Savanna Region with a prominent person from Daboya saying they monitored him and realised he did not even vote during the referendum.

Others have even accused Samuel Tika of inciting his ethnic group (Tampulmas) against supporting the Savanna Region and therefore wonder why he was appointed as Deputy Minister for the same Savanna Region he fought against.

“They (Tika and some Tampulmas) nearly killed two of my team members when we were campaigning for the Savanna Region. I’m a Tampulma but he (Tika) is a disgrace to Tampulma communities in North Gonja

Another said the appointment of Tika will only facilitate division and misunderstanding in the Savanna Region, especially in North Gonja. He said everyone in the North Gonja District of the Savanna Region know that Tika never supported the creation of the Savannah region and that his side called Nurudeen told elders of the Lingbinshi community in North Gonja never to come out during the day of Savannah region float at Lingbinshi because they were working hard to be added to the North East Region which never happened.

Those against Samuel Tika have argued that there were a number of qualified Tampulimas who supported the Savanna region from day one and that any of them could have been considered but not Tika who worked against the Savanna Region.

Meanwhile, some people in Bole are protesting on Bole Radio stations over the failure of Nana Akufo- Addo to appoint one of two Bole NPP personalities; Alhaji Dr. Achanso or Madam Veronica Alele Heming as Savanna Region Minister.

Over twenty people phoned into Nkilgi Fm to express their indignation with one saying NPP has not always been fair to Bole simply because former President John Dramani Mahama hails from the town.

Another caller of Nkilgi Fm said even though Bole was more qualified than any Gonja town to be the Savanna Region capital, the people in the area kept quiet when Salaga was rioting and burning things and therefore feel President Nana Akufo-Addo has only rewarded hooliganism by appointing the MP for Salaga South as Minister of the Savanna Region