The district chief executive DCE for Sekyere Afram Plains district of the Ashanti region, Hon. Joseph Owusu popularly, called Odenkyem has performed the ground-breaking ceremony for the construction of the Rehabilitation of a 9.6km stretch of road networks from Drobonso–Deduako.

He said the move form part of the Nana Addo led NPP government to give a facelift to roads in the district to help boost rural economic empowerment of his people.

Addressing Traditional Rulers and people of Drobonso during a grounds breaking ceremony Hon. Joseph Owusu said the project is part of the ministry of special initiative and rural development projects to enhance socio-economic in the country.

He maintained that the project when completed, will help to reduce the difficulties that people in Anyinofi zone in the district who use to travel through Atebubu in the Brong Ahafo region pass through before getting access to Drobonso, the district capital.

According to Hon. Joseph Owusu, the road will pave way for traders of other parts of Sekyere Central district to come and transact business in Drobonso market as means of generating Internal Generated Fund, (IGF) for the Assembly.

He assured the people that, the district assembly is working tirelessly with Energy ministry towards Rural electrification project to ensure that, 38 communities within the district have been connected to national grade.

The Ashanti regional director of feeder roads, Engineer Edmond Kwaku Doudu for his part said, the office of feeder roads will play supervision role of the project to ensure that the contractor who has been awarded the contract will use the required materials to meet the standard of value for money.

He said, the project is expecting to be completed within 12months and it involves Rehabilitation and construction of bridges to help prevent erosion on the road during the raining season.

Some residents of the community expressed gratitude to the NPP government and the DCE for responded to their request. 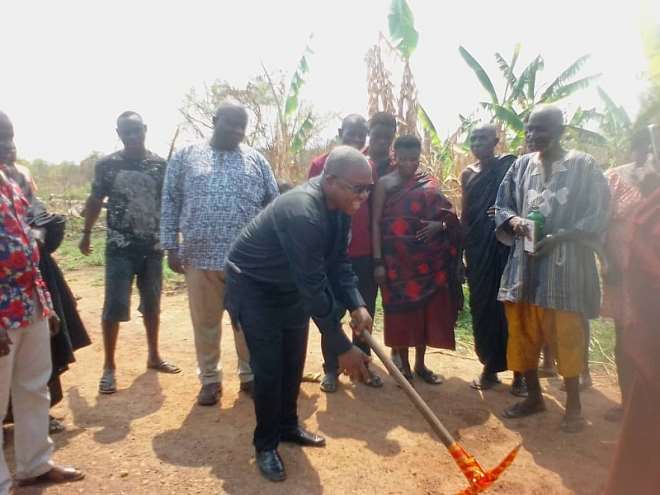