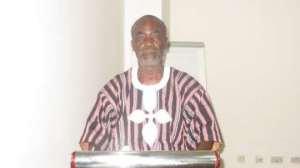 ‘The moral state of the nation smells and needs a fragrance now,’ Messenger Henaku stated at a press conference in Accra.

The rest are idolatry, laziness, disrespect to authorities’ visitors, disrespect to parents/adults and superiors, hiding behind the scenes to sow seeds of discords, opening of minor healed wounds, occultism and witchcraftcy, environmental degradation and pollution.

He said drug abusers, both suppliers and users like cocaine, heroin and India hemp, cigarette producers and smokers and excessive alcoholic users, should also be made to stop.

‘For sexual abusers like adultery, pre-marital sex without the focus on marriage, children below 18 having sex, gaysm like bestialities, homosexualities, lesbianism with rapes and prostitution should all be punished,’ he said.

He suggested that defaulters must be given six months imprisonment with hard labour to serve as a deterrent to others.