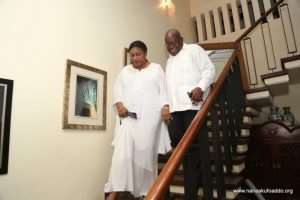 President Nana Addo Dankwa Akufo-Addo has arrived safely in Ghana after a near-fatal accident with the Presidential jet in Washington.

He arrived in Ghana at 8:00 am on Sunday, Minister of Information designate, Kojo Oppong Nkrumah told the media at a briefing.

He said the president and his entourage came through on a South African Airways flight.

“The President of the Republic is back from his trip to the United Nations.”

Nana Addo Dankwa Akufo-Addo and the delegation that traveled with him to the United States escaped what could have been a fatal accident with the Presidential jet in Washington.

Citi News sources indicated that the incident occurred after one of the engines of the aircraft went off few minutes after takeoff on their way to Ghana from Washington.

The aircraft had to fly around a number of times to burn fuel before being assisted to land.

Oppong Nkrumah at the press briefing said: “I can confirm to you that yes, there was a challenge with the presidential jet.”

“After about 20 minutes into the flight from Washington to Accra, the aircraft developed a challenge with one of its engines. And the pilot informed the passengers including the president accordingly. A decision was made to land the aircraft in Washington Dallas airport, but they first required about one hour of flight to dispose of some of the fuel that was on board.”

“Subsequently, the flight landed safely at Dallas Airport in Washington and the president and his delegation got onto a commercial flight, a South African Airways flight and arrived in Accra at 8:00 am this [Sunday] morning. The trip was successful all in all,” he added.

When asked if the government intends to buy a new presidential jet following the near accident, the Information Minister-designate said no.

Issues with presidential jet
This was not the first time such incident had occurred.

In March 2015, the Presidential Jet caught fire while attempting to take off from the Kotoka International Airport.

The Falcon 900, had been tasked to perform a special mission in Malabo, Equatorial Guinea.

Before that, on December 5, 2014, the Presidential jet carrying former President Mahama developed a technical fault which delayed his appearance at the 30th National Farmers Day celebrations in the Western Region.

Nana Addo at the UN
President Nana Akufo-Addo was at the UN on Wednesday, September 26 where he addressed the 73rd UN General Assembly.

His address touched on the anxieties concerning China’s forays into the developing world, the need for UN Reform, the wider vision of an Africa Beyond Aid, and the recent passing of former UN Secretary General, Kofi Annan.

Kojo Oppong Nkrumah, the president’s trip outside the country, was “all in all successful.”