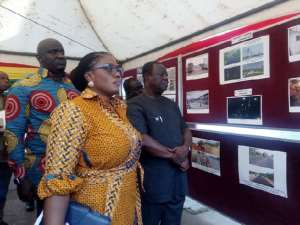 Minister of Roads and Highways, Kwasi Amoako-Atta, made this known on Tuesday in Accra when he addressed journalists during the Meet-the-Press Series organized by the Ministry of Information.

Giving an update of the road sector since the ruling New Patriotic Party (NPP) assumed office on January 7, 2017, he observed that it was “useless” to start infrastructural projects when they cannot be completed.

As a result, he stated that arrangements have been made for the Ministry of Roads and Highways to take over all the outstanding cocoa roads to ensure their completion.

The Minister disclosed that President Akufo-Addo had ordered the Roads and Highways Ministry to ensure full payment of all contractors constructing footbridges on the Adenta-Madina N4 Highway.

He said the president made the order long before the protests by aggrieved residents at Madina, Accra following the killing of a student by a vehicle.

However, Mr. Amoako-Atta indicated that in the spirit of trying to complete all abandoned projects, the Akufo-Addo administration has managed to convince the contractors to return to Ghana and assured residents of Adenta-Madina that by April 2019, the construction of the footbridges would be completed, saying all the six contractors working on the six footbridges had been fully paid.

According to the Minister, as at January 2017 when the NPP came to office, only 23 percent out of 72,381 kilometres of roads were paved after 60 years of independence.

Touching on the conditions of roads in Ghana during 2017, Mr. Amoako-Atta revealed that only 39 percent were deemed good, 32 percent considered fair and 29 percent in poor state.

He said in 2017, the new administration inherited a total debt stock of GH¢1.56 billion in the roads sector, with GH¢506 million out of the amount being owed the Road Fund and GH¢1.06 million owed the Consolidated Fund.

According to the minister, an amount of GH¢3.5 billion has been released to his Ministry to pay all debts owed road contractors nationwide.

According to the minister, this year a total of 101,100 kilometres of road in the country shall undergo maintenance.

The Sector Ministry and its agencies and departments, according to the minister, are to also undertake rehabilitation works on 50 kilometres of trunk roads, 60km of urban roads and 450km of feeder roads.

The Minister explained that some of the maintenance works would include spot improvement, re-gravelling, asphaltic overlay, partial reconstruction works on 55 kilometres of trunk roads, 500km of feeder roads and 400km of urban roads.

Mr. Amoako-Atta indicated that in 2018, an amount of GH¢1.407 billion was disbursed for maintenance works, initiatives of the agencies under the ministry and repayment of the outstanding portion of a UBA loan.

He declared that a chunk of the Kumasi Town Roads would be improved in 2019.

“Work on the Kumasi Town Roads is of topmost priority to government, hence the decision by President Akufo-Addo to cut the sod for the project in August 2018,” he added.