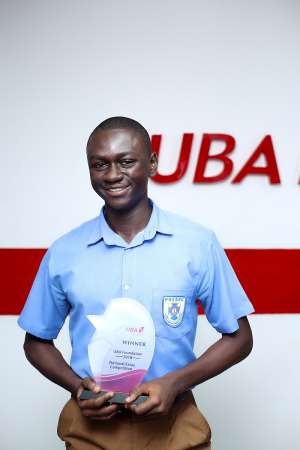 This is the second time PRESEC has won the award consecutively with the last year’s winner, Jason Emmanuel Ghansah of PRESEC and two other girls from Wesley Girls who won the second and third position currently pursuing their tertiary education.

Mr Sabit received an amount of $5,000.00 and a trophy as the wining prize closely followed by Manasseh Sampana Nam-Mahime, a student of St Aquinas SHS in Accra as the first runner-up, while Nana Adwoa Quayson of the Aburi SHS picked the second runner-up prize.

The second and third winners were both given $3500 and $2000 respectively as the reward for their tuition fees in any university of choice.

That notwithstanding, the rest of the 10 finalists were each given a UBA branded laptop and a certificate as a consolation package and reward for taking the bold step. 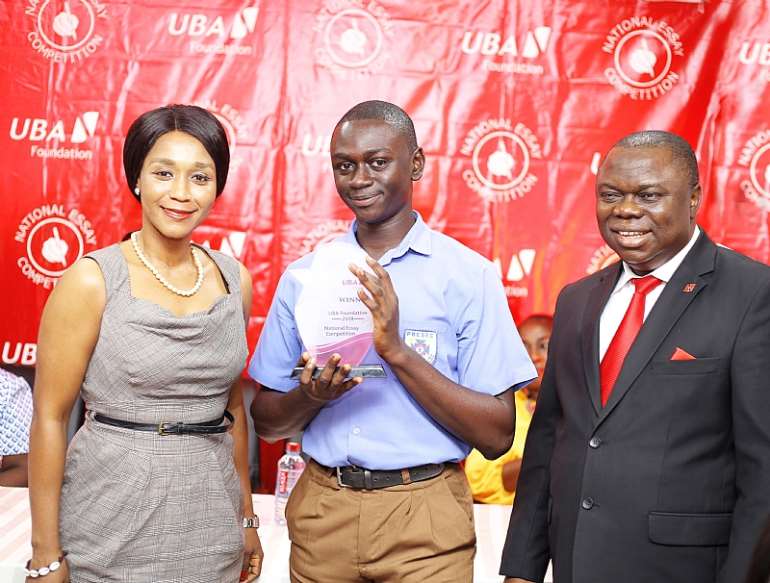 Speaking at the ceremony, the new UBA Ghana MD/CEO, Mr Isong Udom said the Foundation has spent huge sums of money to actively facilitate educational projects and bridge the literacy gap on a Pan-African scale.

According to him, the UBA Foundation has proudly invested over $150,000 over the past 4 years in this competition.

He added that the UBA Foundation has under it the Read Africa Project, through its maiden – Each One Teach Project, donated about 500 literature books titled ‘Fine Boys’ to schools across the country.

The MD of UBA stressed that UBA Foundation’s National Essay Competition has grown to be one of the best initiatives that allows students to exhibit their cognitive skills and potentials while developing a positive work ethic with problem solving and critical thinking skills.

“The National Essay Competition is one of our stunning initiatives of which we will forever pledge our full commitment,” Mr Udom posited.

Deputy Minister of Education, Mrs Barbara Ayisi Acher in-charge of Technical and Vocational Education Training (TVET), noted that lauded UBA Foundation for shining example in helping to build a critical mindset of the youngsters to become agents of change in their communities and nation at large.

She called on other corporate institutions and benevolent organization to also chart this same path so that more students can benefits.