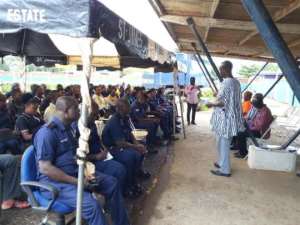 The National Commission for Civic Education (NCCE) has called on the Police to uphold, cherish and preserve the 1992 constitution to consolidate the gains of the country’s democratic dispensation.

According to Mr Issaka Zitor, a Deputy Brong-Ahafo Regional Director of the NCCE, the Police could do this successfully if they avoided behaviours and tendencies that could undermine the constitution.

Mr Zitor made the call when he was addressing some senior officers of the Regional Police Command at a forum organised by the NCCE to mark this year’s constitution week on Friday in Sunyani.

He indicated that as a law enforcement agency, the Police must ensure that provisions in the 1992 constitution, which remained the supreme law of the land, were enforced to the letter without partiality or bias.

Pastor Emmanuel Appiah-Kubi, an anti-corruption officer at the Brong-Ahafo Regional office of the Commission of Human Rights and Administrative Justice (CHRAJ) condemned the act of cronyism, extortions and nepotism in public services.

He reminded that it was a criminal offence for public officials to receive or accept gifts which had semblance of bribing.

Pastor Appiah-Kubi said offenders could be liable to jail term not exceeding 10 years, and urged Police personnel against all forms of corruption in the course of their official duties.

Madam Doris Gbongbo, the Acting Brong-Ahafo Regional Director of the NCCE said the Commission was mandated by the constitution to educate the public on the policies and programmes of the government.