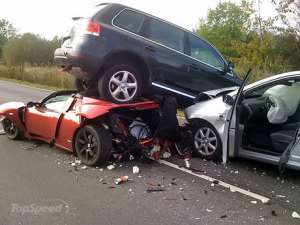 The police officer, Sgt Daniel Abotsi of Konongo Police Division in the Ashanti region, was driving a Opel Astra private car from Accra towards Kumasi with his daughter, whose name is yet to be identified, when he veered off his lane into the opposite direction lane and collided head-on with a Metro Mass Transit Bus at about 6:30 AM.

According to the Eastern Regional Police Public Relations Officer, ASP Ebenezer Tetteh, the police officer and his daughter died on the spot and they have since been deposited at Suhum Government Hospital for preservation and autopsy.

The Metro Mass Transit driver, Seidu Clifford, has been detained to assist in the investigation, while the two accident vehicles have been removed from the road paving way for free flow of traffic, he added.