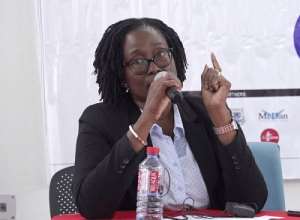 THE FORENSIC and Science Laboratory Department of the Ghana Police Service has extracted the semen of one Amos Apraku for analysis. Amos Apraku is the second suspect arrested in connection with the murder of the former Marketing and Public Affairs Manager of the Ghana Ports and Harbours Authority (GPHA), Josephine T. Asante.

Aside from the semen, the police have also collected other physical evidence like foot and fingerprints of the suspect to the Police Hospital in Accra following an order by the court. This is the second suspect whose bodily fluids and other physical evidence are being analysed by the police to trace who actually committed the heinous crime which occurred on Sunday, January 13, 2019, at the official residence of the GPHA official at Mataheko, near Afienya in Tema.

Strangely, until yesterday, police were yet to take the same evidence of the first suspect, Christian Agyei – houseboy of the deceased – although the prosecution secured a court order about two weeks ago.

The suspects were taken into police custody until February 14, 2019, for further investigations when the case was called yesterday.

The late Josephine Asante was allegedly killed by unknown assailants on Sunday, 13th January, 2019, after she had returned from a party organized for senior management staff of the company.

She was said to have left the party ground at about 11:30 pm when the complainant who happens to be his driver drove her to her house.

However, the driver was said to have alighted at Michel Camp and handed over the keys of the Mercedes Benz saloon car to the deceased to continue the journey from Michel Camp to her home at EMEFS Estates by herself.

The houseboy is said to have met her upon reaching home and collected a polythene bag from her and returned to his room at the boys’ quarters.

According to the prosecutor, at about 03:30 am on that Sunday, the houseboy claimed he and the deceased’s son heard some unusual sound on the compound and therefore conducted a search but did not find anything. They therefore went to bed.

However, the suspect claimed he saw a male figure wearing a black t-shirt and a jeans running through the living room and escaped through the main gate. At about 08:30 am, the houseboy and the son tried opening the deceased’s door but found it locked and therefore called the complainant.

The driver, according to the prosecutor, found the keys to the house at the entrance of the gate when he went there upon receiving the call and used same to open the deceased’s door and found her in a pool of blood lying in a supine position.

According to the facts, the investigators spotted the houseboy burying a polythene bag containing GH¢430 and the deceased’s wristwatch behind his room and was therefore apprehended.

Amos Apraku was arrested on Saturday, January 26, 2019 when he reported for work.