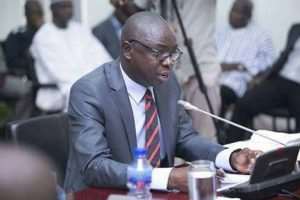 Seven officers of the Ministry of Food and Agriculture (MOFA) in the Sunyani Municipality of the Brong Ahafo are under investigation for stealing fertilizers for the Planting for Food and Jobs programme.

The Brong Ahafo Regional Minister, Kweku Asomah-Cheremeh who made this known at a press conference said the fertilizers, estimated at GH¢600,000 were stolen between November 2017 to June 2018 at the Ministry’s warehouse.

Mr Asomah-Cheremeh said the Police and BNI have begun investigations into the development.

He, however, indicated that the theft will not affect the Planting for Food and Jobs Programme currently ongoing in the region.

“We could see on a hindsight that the quantity missing was worth about GHC 600,000. In the old cedis, this will be about GHC 6 billion and that is what is under investigation now. We are not so conclusive on this. About in the sense that the figure may come down. It may be higher than that. For now that is what we think.”

The Planting for Food and Jobs programme is one of government’s flagship initiatives aimed at improving agricultural production in the country.

The programme, rolled out in all 216 districts of the country involves the supply of farm resources such as high-yielding and improved seedlings to participating farmers.

The programme was envisioned to absorb unemployed youth in rural areas, with the government initially targeting the creation of 750,000 jobs in its first phase.

The government, this year, disclosed that the first phase of the policy had accounted for the creation of 745,000 jobs .

The sector minister, however, explained that the jobs were created in rural areas and were essentially not taxable and did not contribute to pension funds.

Other milestones under Planting for Food & Jobs