The Municipal Chief Executive (MCE), Mr. Ernest Kofi has appealed to people in the Jomoro Municipality to pay their taxes to the Municipal Assembly to enable it to meet their needs.

He said this at separate meetings with chiefs and people of New Nzulesuazo, Azuleti, Mpataba, Nuba, Ndumsuazo, Nawule and New Kabenlesuazo, as part of his familiarization tour of the Municipality.

The tour was also meant to identify problems confronting the people and initiate strategies for solving them.

This is the first familiarisation tour the MCE has embarked upon, since he was appointed by President Akufo-Addo last year and subsequently elected by the Assembly to steer the affairs of the Assembly.

It is to bring local governance to the doorstep of the people and to listen to the problems of the individual towns in the Municipality.

The problems facing these communities include poor roads network, toilet facilities, electricity and the bad state of some school buildings.

He said the Assembly’s revenue collectors would soon embark on a revenue mobilization exercise in the Municipality and called on the people to cooperate with them to generate revenue for the Assembly.

He urged the people to understand that it is their responsibility to pay taxes for development.

He revealed that majority of the people in the Municipality are not paying their taxes most especially the owners of motorbikes.

“It is compulsory for all motorbikes in the Municipality to license his motorbike so that the government can get money for development”, he emphasized.

“I’m appealing to you to pay your taxes so that the government can also develop your area rapidly, let us not allow the central government to go for loans to come and develop our areas for us”, he appealed.

At Azuleti Community, the MCE urged the farmers there to embrace the government’s Planting for Food and Jobs flagship program to better their livelihoods.

He said the government exists for the general well-being of every Ghanaian so the people must bury their political differences and embark on serious farming, not only to promote food security in the country but also to enhance their standard of living.

The MCE promised the community with 30 bags of cement and said the cement would be donated within the week.

The Queen Mother of the area, Nana Awuah Badwo III thanked the MCE for visiting them to know their concerns.

She used the occasion to appeal to the MCE to establish a JHS for the community to ease their burden of sending their wards to different towns to further their education.

Fertiliser Plant Establishment
At Nuba community, the MCE revealed that the government has signed a partnership agreement with the Moroccan government to establish a fertilizer plant in the Jomoro Municipality.

The MCE expressed worries over the land litigation which is likely to stop the project or being transferred to a new District.

He appealed to the chief of the area to speak to their colleague chiefs who are fighting with the ownership of the land to ceasefire and allow the project to be done.

He added that no government would invest its resources into a project which is characterized by a litigation.

He said the youth in the Municipality are unemployed and said if the project comes off, it would be creating over 3,000 job opportunities indirectly and directly.

The MCE pledged his total commitment to giving GHC12,000 to the Nuba community to purchase a brand new water pump to repair their long-damaged water project.

He asked the community to rally behind President Akufo-Addo’s Free SHS flagship program and educate their children to pass well at the JHS level and enjoy the program.

He also used the opportunity to advise the youth not to involve themselves in gambling activities.

Nana Simanli Kpanyinli IV, chief of Nuba in a welcoming address thanked the MCE for the kind gesture and pledged to supervise over the repairing of the water project.

He, however, complained about the deplorable state of the four-kilometre feeder road linking the community to Sowodadzem, and appealed to the Assembly to help in its rehabilitation to facilitate the movement of people and farm produce to the market centres.

He assured the MCE that he would personally speak to his colleague chiefs fighting over the proposed land for the establishment of the fertiliser plant.

He said he is ready to release land for oil companies which are looking for land to establish any facility in the Municipality.

Some of the Chiefs in the communities presented foodstuffs and sheep to the MCE and his entourage.

The MCE was accompanied by staff of the Assembly, NPP Jomoro Constituency Executive Members, the media among others. 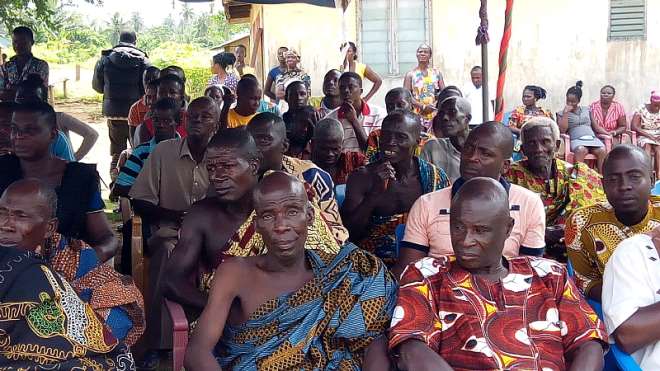 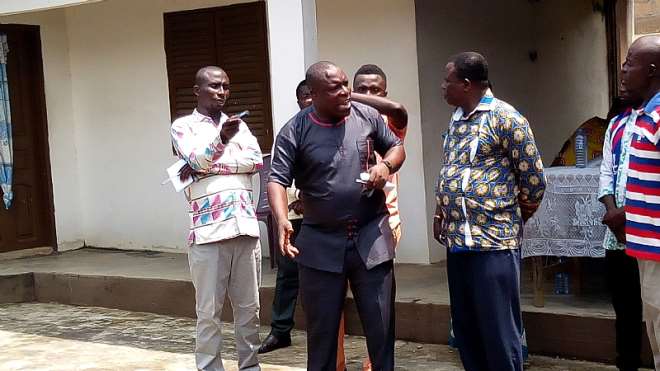