Dr. Opuni claims the NPP chairman defamed him when he alleged that he (Opuni) withdrew the huge sums while he was in charge of COCOBOD.

Attached to the suit is Multimedia Group Limited, operators of Adom TV where the alleged defamatory statement was made.

DEFAMATION
In his Statement of claim, Dr. Opuni averred that the defendant on Adom Tv Badwam show stated that ” meanwhile they have spent all the money. As of 20th December 2016, Opuni withdrew almost $400 million… He claims he used part of the money to organize a press soiree and to construct Cocoa roads…i didn’t know that in Ghana two years after constructing Cocoa roads, dwarfs are able to lift and take away the roads “.

This, according to the plaintiff, is understood to mean that he illegally withdrew $409 million from the coffers of COCOBOD.

He said the words complained of also meant he used the money to construct non- existent roads and that “he is an incompetent person and unfit to hold the office he held at the time by reason of his fraudulent and corrupt conduct.” He further averred that the words complained about also meant that he is corrupt, a fraud, incompetent person and’ unfit person with a loose and disreputable character”.

Dr. Opuni claims that the defendants published or caused the statement to be published in order to whip up public sentiments against him knowing very well that he is involved in a criminal trial which is before an Accra High Court.

He added that the statement was made in a sensational manner and the defendants ought to have known that the allegations were false. This he claims has seriously injured his reputation and has made him a subject of public ridicule, scandal and contempt.

RELIEVES
Dr. Opuni is seeking general damages of gh20 million against the defendants, a retraction and apology on Adom TV and its online platform with the sane prominence given to the alleged defamatory statement. He is also seeking an order for perpetual injunction against the defendants either by themselves or their agents and assigns as well cost, inclusive of his lawyer’s fees.

Already, Dr. Opuni and businessman Seidu Agongo Managing Director of Agricult Ghana Limited are currently before an Accra High Court for causing financial loss to the state to the tune of gh 217,370,289.22. The two are facing a total of 27 charges, including defrauding by false pretence, willfully causing financial loss to the state, money laundering, corruption by a public officer and contravention of the public procurement act.

The two are in court over the purchase and supply of lithovit fertilizer which the state said was done in contravention of several laws. 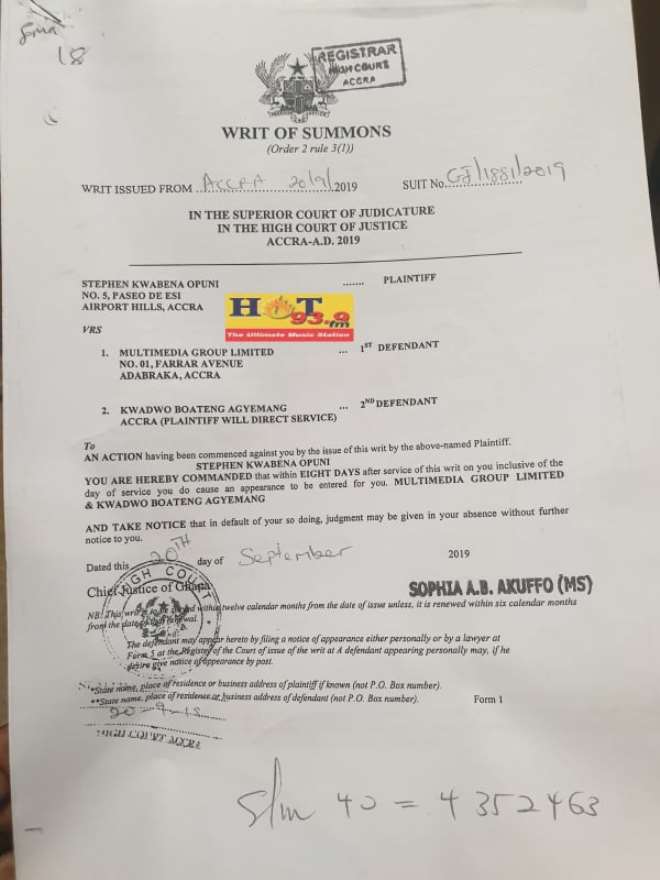