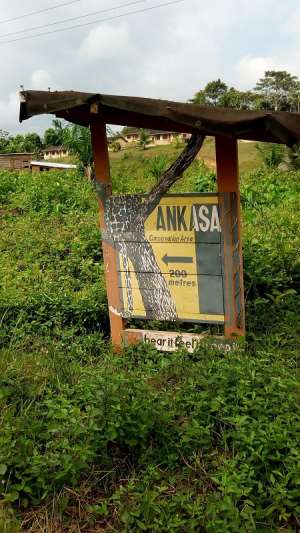 The Chiefs and people of Old Ankasa in the Jomoro Municipality of the Western Region have made a passionate appeal to telecommunication companies to as a matter of urgency extend their services to them.

The Ankasa Conservation Area is an area in south-western Ghana, about 365 kilometers west of Accra near the border with Côte d’Ivoire.

These communities are endowed with cash crops such as cocoa, coconut, rubber, plantain, cassava, yam among other crops, which can potentially propel the areas’ development, but the lack of communication network is a disincentive to development partners.

A visit to the communities by this reporter revealed that the residents have to climb trees and hills before getting access to network to make calls.

Speaking to the PTA Chairman of Old Ankasa, Mr. Charles Kyeremah, he said the absence of a functioning telecommunication network in the area is a worrying situation.

He opined that the situation is very worrying because workers such as teachers posted to the area and its surrounding communities find it difficult to cope with the situation.

He added the lack of telecommunication network signal in the area and its surrounding Communities is affecting the social and economic lives of them as residents are completely cut from communicating to the world.

Mr. Kyeremeh seized the opportunity to appeal to telecommunication companies and government to provide them with telecommunication network for them to have access to information and be in tune with local and global issues.

“We don’t have any communication network here and we can’t make calls and whenever we want to make calls we have to go and climb trees before we can make calls and we are begging the government to help us, we are suffering too much”, he appealed.

Other Challenges Facing the Community

The P.T.A Chairman of the area, Mr. Charles said the community lacks place of convenience, a situation which has compelled residents to resort to open defecation.

He appealed to government to construct a toilet facility for them.

He also decried the lack of potable water in the area and pleaded with government to come to their aid.

He revealed that the community doesn’t have any health facility, let alone, a drug store.

He said patients have to walk so many kilometers to Sowodadzem, before accessing health care facilities and appealed to government to come to their aid.

He alse appealed construct road from Sowodadzem junction to Ankasa forest through Amokwawsuazo to enable them transport their farm produce easily to the market.

The deplorable state of this road network has compelled commercial vehicles to abandon these communities thereby impacting negatively on the local economy as farmers and traders are left stranded and food crops left to rot in the farms.

Market women and inhabitants of these farming communities are the hardest hit by this situation since vehicles conveying their goods are not prepared to go to the farms due to the deplorable nature of the road.

Mr. Kyeremeh said the situation had made it difficult to send their farm produce to Sowodadzem, Elubo, Tikobo No.1 and Nzema Aiyinasi market centres.

He also added that the situation has affected sick and pregnant women during labour most of whom are only put on motorcycles to board a vehicle at Elubo junction.

The situation, this reporter further gathered, prevented tourists from visiting the Ankasa Forest which has drastically reduced revenue collection for the area meant for development.

“We are suffering here, the road network here is in a very deplorable state and here is where you find the virgin forest, this is the Ankasa Forest but successive governments have failed to construct the road linking this beautiful forest and nowadays tourists don’t come here because of the road network but we want to use this great opportunity to appeal to the government to come to our aid”, he lamented.