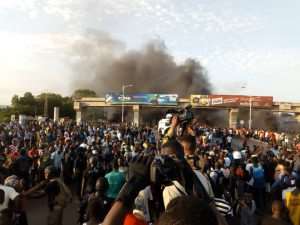 I have covered two major elections in Ghana and listened to the people’s frustrations from all over the country, but, I have never ever witnessed a people’s anger like I did of residents along the Madina Adentan stretch who have been demanding a basic necessity like footbridges on a 6-10 lane high street.

The protest was unplanned. The original plan was for the residents to hold a vigil and a peace march on Monday as part of efforts to put pressure on authorities to get their need addressed.

But, a vehicle would hit a pedestrian once again and all hell will break loose.

That would be the 194th death since January 2018, according to the residents, and the fourth in about a week.

The people, whose indignation grew by the minutes the lifeless body lay under the skeleton of a footbridge (she would have ordinarily used had it been completed) burned lorry tyres, blocked the road and dared the police to kill them, as they chanted, “no bridge, no road”.

Another added, “don’t they use this road every day they travel up there to go and drink tea?” obviously referring to the government’s retreats at the Peduase Lodge.

The people were incensed and furious. It could easily be read on their faces. Some vented their spleen on the journalists. “We will not talk to you. You will come and cover this to receive awards, yet we get no solution to our problems”, one charged at me.

But barely three hours after their protest had forcefully been ended by the police, the government issued a statement announcing the footbridges will be started by next week.

No, the government didn’t need reminders to construct footbridges on the highway. And it shouldn’t take people abandoning their businesses to demonstrate for the government to do the right thing.  But this is Ghana, and I am not surprised. The only language our leaders seem to understand pretty well is protest.

The roads minister, Kwasi Amoako-Atta is on record to have stated that he did not have a grip on the Adentan situation because he was away from Accra and will know upon his return when he had been briefed. I get it, the Adentan stretch was completed only this month and the residents are asking for way too much because the government will, by all means, complete the construction of the footbridges.

As I write, the government is in the dilemma of getting the Kwame Nkrumah University of Science and Technology back up again after students’ violent protest led to the destruction of about 40 cars and other properties worth some 1.7 million cedis.

For months, the students had communicated what they said was a tyranny in the name of a vice chancellor, going as far as petitioning the president and resorting to the law courts. But no one will hear their plight until they decided to embark on a “peace march”.

The government’s immediate response to the KNUST crisis was to dissolve the school’s governing council, albeit illegal, and put in place, a temporary one. So why can it not “dissolve” the inter-ministerial committee which looked on when the first person, second, third and 193rd person died? When the residents started their protests mildly, about two weeks ago, the government said it would take “about three to four months” to get a contractor back on site to complete the footbridges. The municipal head of the Adentan municipality, Nii Noi Adumoah, sounded helpless and frustrated on air when asked when the bridges would be fixed.  Several letters he and his people had written to the appropriate offices had been ignored. But when they protested on the spur-of-the-moment, the government found a way out.

Kwasi Amoako-Atta who had asked the whole world to wait for him to return to Accra suddenly found his pen and signed a press release stating work would start on the bridges sooner than the people had asked for. How many deaths did we have to witness before the government would act?

Already, some residents of Tema and other commuters who use the Tema motorway; another death-trap are boycotting the payment of road tolls to protest the many potholes on that stretch. The motorway has seen no major rehabilitation since its construction fifty-three years ago, yet, the stretch remains one of the many roads that continue to swallow the lives of innocent people almost daily.

A day after the protest, a government delegation, including the Inspector General of police, the Roads Minister, Minister of Interior visited the Adentan community. I am yet to understand why they went, and what exactly they went there to do. To raise the dead back to life? Or to put up the finished bridge?

While there, they announced that six different contractors would be contracted to work on the footbridges. This means, there would be one contractor each for a footbridge. At this point, I am convinced we are a really crooked country. Or is it the leadership that is crooked? We have not been told the cost of completing one-foot bridge, but certainly hiring different contractors for each bridge will cost more.

Certainly, this will not be funded from the minister’s pocket, neither will it come from the Madina or Adentan MP, so why should they be bothered? It is the same people complaining about the spate of deaths, who will pay. The government will rather approve increased sitting allowances for committees and board than spend the tax payer’s money wisely.

Anyway, we can only rant. We hope it gets better. We will see what the days ahead will bring. Until the next protest…

NB: The police lied when it said the only casualty in their riot control methods was a 14-year-old who has since been treated. I saw two people with head injuries. The police officers themselves carried an injured person into their pickup. I later got to know he was a journalist with online news portal, Pulse.com.