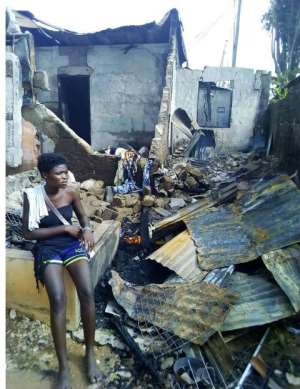 Twenty-four persons have been displaced by a fire-outbreak at Odorkor-Tsuim in the Ablekuma North Municipal Assembly.

The fire which completely destroyed six rooms in a 20-bedroom house burnt every property in them running into thousands of Ghana Cedis.

Mr. Kwaku Duah, the Ablekuma North Municipal NADMO Director made this known to the Ghana News Agency (GNA) when was taken round to the disaster scene to inspect the extent of damage.

No casualties were fortunately recorded, according to Mr. Duah, among the 40 occupants of the house.

Mr. Duah said the fire reportedly started around 0400hours and noted that by the time the Ghana National Fire Service (GNFS) got there around 0420hours, everything in the six rooms had completely been burnt already.

He said but for the timely arrival of the GNFS, the fire which was suspected to have been caused by an electrical fault would have spread to the other rooms.

Meanwhile the Ablekuma North Municipal Chief Executive (MCE) Mr. Kofi Ofori has visited victims of the fire disaster and assured them that he was awaiting report from NADMO.

According to Mr. Ofori upon receipt of the report, the assembly will try and see what sort of intervention it will make for the victims.

The MCE expressed regret about the disaster and cautioned residents to very careful with their electrical wirings, gadgets as well as the usage of gas in their homes.