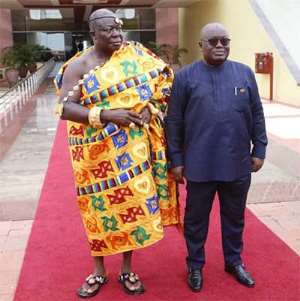 President Akufo-Addo says his government will ensure that every part of the country will benefit from his mandate as President of the Republic.

Addressing the Asantehene, Otumfuo Osei Tutu II, at the ceremonial forecourt of the Jubilee House during a courtesy call on him, President Akufo Addo said his administration is determined to make sure that all part of the nation are touched by his programmes of transformation and development that his government is committed to.

“I don’t want my mandate to be exclusive to one side or the other. So where things need to be done, they will be done on their merit, not as a result of inclination to one set of Ghanaians or the other” the President said.

Participation in Kyebi Grand Durbar
On the events of the 23rd of August 2018, in Kyebi, where the Asantehene, graced the occasion to honour the life of the late Okyenhene, Nana Ofori Atta, President Akufo Addo noted that Otumfuo’s participation, demonstrate his commitment to ensuring that there is peace within the boarders of Ghana. The President added that the Asantehene’s visit signaled that the perception of rivalry between Okyeman and the Ashanti kingdom does not exit but rather unity and solidarity are the watch word between the two states. President Akufo Addo also added that the acceptance of the Otumfuo to participate in the Grand Durbar showed his commitment to the one Ghana project aimed at developing the country.

The President stated that the Asantehene played a valuable role through various meetings to ensure that the peace of Ghana was sustained before, during and after election 2016. Ghanaians he said are forever grateful for his contribution to the sustainance of the peace of Nation.

Support for Education
On the issue of Education, the President observed that the Asantehene has showed steadfast support for the implementation of his government’s flagship programme, “Free SHS”. The President prayed the Asantehene and his chiefs to give their backing to the double track system which he says is a system that is designed to give a boost to the free SHS policy.

Dagbon Crisis
The President also expressed confidence in the mediation effort of the Asantehene and a group of other eminent Chiefs in the Dagbon crisis. He pledged that all resources that may be needed to resolve the crisis will be provided to ensure that a roadmap is realised within the shortest possible time to pave way for a solution to the dispute and the subsequent installation of a new Ya Naa.

The Asantehene
The Asantehene, Otumfuo Osei Tutu in his address commended the President for taking steps to fulfill the promises he made to the people of Ghana. He cautioned the President to ensure that all his appointees whom he has chosen to work with stay focused on the job and not on econoimic gains that their various positions offer them. He pledged that he will continue to pray for the success of the Akufo Addo government and for the development of mother Ghana.