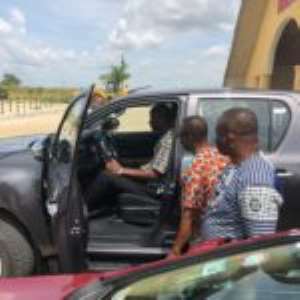 The North Tongu District Chief Executive, Mr. Collins Arku has personally purchased a brand new Toyota Hilux pickup for the Revenue Collection department of the Assembly to help boost revenue collection in the District as the Assembly strives to meet the development aspirations of the people as adequate and reliable internal generated fund is the key to ensuring rapid development of the District.

Mr. Arku explained that the revenue department of the Assembly responsible for educating the people on the need to pay their taxes regularly and to collect tax has no vehicle to perform such sensitive duties hence the decision to personally address the problem by purchasing the vehicle and handed over to the head of the revenue department of the Assembly.

The North Tongu DCE who is aggressive to see rapid development of the District said his determination to bring the needed development to the area was the motivational factor that led him to mobilize personal resources to procure the vehicle for the Assembly because it was his conviction that the District would be able to see much development only when the people understands the importance of paying their taxes.

Mr. Arku who said this when he presented the new vehicle to the Assembly at Battor noted that the District Assembly Common Fund was not enough to depend upon if the people needed to be developed therefore there was the need for the North Tongu District Assembly to supplement the Common Fund by paying serious attention to internally generated fund, which he pointed out ought to be seen as critical in the development agenda of the area.

The North Tongu DCE therefore charged the Assembly’s revenue collectors to distinguish themselves in carrying out their duties and asked that care be taken to ensure regular maintenance of the vehicle which is the property of the Assembly to help prolong its lifespan and to use it for the purposes for which it was provided.

Mr. Arku continued that much as government was putting in place the necessary efforts to bring the relevant development to the people it behooves on the people to equally contribute their quarter to complement government’s efforts by payment their taxes regularly saying as the representative of the President in the District he is leading by example and called on all to support the development efforts in North Tongu.

Touching on the work of the police in the District, the North Tongu DCE said the personnel of the service needed to be commended and be given the needed support that would make them to deliver more effectively in protecting life and property saying it was rather unfortunate that the police station at Juapong lacked furniture a situation he described as not encouraging enough. Mr. Arku who also presented sets of modern furniture he personally purchased and presented to the Juapong police station said during one of his official tour of the District, he came to the police station at Juapong and realized that there were no seats for visitors and even suspects who were brought to the station have no seats to sit on which he said should not be the case because at the police station there was the need for suspects rights to sit down be respected.

He called on the personnel to put the chairs to good use as people who visit the police station would not be denied the right to sit down noting that the people also needed to see the police as friends and to assist them in the discharge of their duties to ensure that all would live in peace and carry out their activities without fear.

The Volta Regional Police Commander, Deputy Commissioner of Police (DCOP) Francis Ebenezer Doku who received the chairs on behalf of the Juapong police commended the North Tongu DCE for the gesture and said the chairs would be used for the intended purpose and also makes the Juapong police station more attractive to people who visit it.

DCOP Doku also cautioned the personnel at the Juapong police station not to take any of the seats to their homes and to ensure that it would be used more effectively to bring the relevant transformation to the station and asked individuals and groups to emulate the North Tongu DCE by providing the necessary support to the police.

The North Tongu DCE again went to the support of the St. Kizito Senior High Technical School at Mepe this time with financial support from the District Assembly to provide additional furniture for the dining hall of the school, which became necessary as a result of increased student population due to the free education police of the New Patriotic Party (NPP) government led by the President, Nana Addo Dankwa Akufo Addo.

Mr. Arku said once he realized the need of the school the Assembly had quickly responded to it by addressing the challenges which occurred as a result of the free SHS policy which he said was one of the government’s policies to ensure that all persons who qualify to go to second cycle schools would do so without any form of discrimination particularly due to financial difficulties parents face.

The DCE pointed out that the free education policy has created equal opportunity for students to develop their skills and urged them to take their lessons more seriously as they respect their teachers and parents to enable them to acquire relevant knowledge and justify the investments government and their parents were making in them adding that it would be relevant for the various stakeholders in education to collaborate with government to ensure success of the policy.

The Headmaster of the St. Kizito Secondary Technical School at Mepe, Mr. Abraham Dey thanked the North Tongu DCE and the Assembly for the gesture and said the furniture came at the right time as many of the students have no dining hall furniture to seat on and promised that care would be taken to protect the furniture to increase its lifespan.