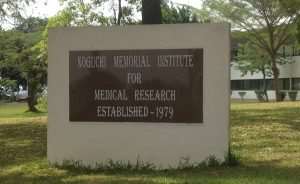 Government has withdrawn from Parliament a 1.6 billion Japanese Yen financing agreement for the construction of an Advanced Research Centre into Infectious Diseases at the Noguchi Memorial Institute at Legon.

According to the Majority Leader, Osei Kyei Mensah-Bonsu, the funds for the project, the equivalent of some $14.4 million is a grant from the Japanese agreement, and should not have been laid in the house requesting approval.

It was one of six agreements amounting to $236 million that were laid in parliament on Monday by Finance Minister, Ken Ofori-Atta.

The withdrawal reduces the total amount being sought now to 222 million dollars.

Speaking on the floor of Parliament on Tuesday, the Majority Leader said the agreement should not have been laid in Parliament.

“The contract agreement that was laid in Parliament in respect of the Noguchi Memorial Institute for medical research, University of Ghana, there is an amount of Japanese Yen 1.68 billion. That is a grant and that ought not to be laid in the House,” he explained.

The government of Ghana signed an agreement with Japan for the construction of an advanced centre for medical research at the Noguchi Memorial institute at Legon in 2016.

John Mahama, the President at the time, after holding bilateral discussions with the Prime Minister of Japan, Shinzo Abe, said the move will enhance healthcare infrastructure in Ghana.

“We’ve held fruitful discussions with Prime Minister Abbey and we have agreed to continue our collaboration in the areas of improvement in health care infrastructural development and economic cooperation.”

“We just signed two agreements. One for the construction of an advanced research centre at the Noguchi Memorial Institute for medical research in Accra, and the second for the extension of scholarships for improving the human resource potential of Ghana. These two agreements will go a long way to advance the bilateral relations between our two countries,” said the President.