The Deputy Upper East Regional Minister, Hon. Frank Fuseini Adongo has hinted that going forward; the National Builders Crops (NABCO) would place greater emphasis on career fairs and mentorship clinics to give beneficiaries a head-start for the world of work.

He said the programme would also look at building entrepreneurial skills in the various modules to enable personnel transit as job creators instead of job seekers.

Hon. Adongo gave the hint at the maiden anniversary celebration of NABCO at Bolgatanga in the Upper East Region where hundreds of the beneficiaries converged from all the fifteen municipalities and districts.

He said the government of President Nana Akufo-Addo would outline measures intend to pursue and make the programme sustainable and more relevant to the beneficiaries and the country as a whole.

The Deputy Minister, who was the Guest Speaker, intimated that NABCO stands to be one major public service agency that creates avenues for the youth of Ghana to participate in governance of the country.

He added that through this huge initiative the youth would imbibe the country’s age-old values of patriotism, volunteerism and loyalty as well as uphold and defend the good name of Ghana. This he said would ultimately make the nation great and strong hence they should be bold to defend the cause of freedom and right.

Hon. Adongo, was however, quick to add that just like any other endeavour, the vision of NABCO would not be realized if the beneficiaries did not eschew indiscipline, laziness and desire for quick money.

He, therefore, charged the beneficiaries of NABCO to put all hands on deck and own the programme as their private businesses, bearing in mind that they are not employees of those agencies but apprentices deployed under their tutelage in order to gain or acquire the requisite experiences that might send them to greater height.

Hon. Adongo also an MP for Zebilla constituency assured them that NABCO was born and is here to stay and congratulated the government and the beneficiaries on their first anniversary as a result charged both entities to do all in their power to resolve challenges associated with it and also sustain it into eternity.

He assured the beneficiaries that their concerns would be addressed at the national event when they meet with the national hierarchy of NABCO in Accra for the climax in October this year.

The various implementing agencies took turns to address the participants. The Regional Focal Person for the Feed Ghana module under the Ministry of Agriculture, Ms. Mavis Bulmuo said the agency received 348 trainees for mainstream extension and data collection with additional 52 under veterinary services and 69 from other implementing modules to assist in the planting for Food and Jobs (PFJ) programmes also the sale of subsidized inputs such as deed and fertilizer.

She added that 124 got permanent jobs made up of 94 into mainstream Agriculture Department and 30 in other organizations.

Ms. Bulmno touched on the enormous impact made in the lives of the farmers in the region through extension service delivery the the NABCO personnel by providing technical services resulting in number of farmers reached from 152, 860 in 2018 to 218, 786 in 2019. This represent 43% increase in the first quarters and further increased from 191, 766 in 2018 to 254122 in 2019 in the second quarters. 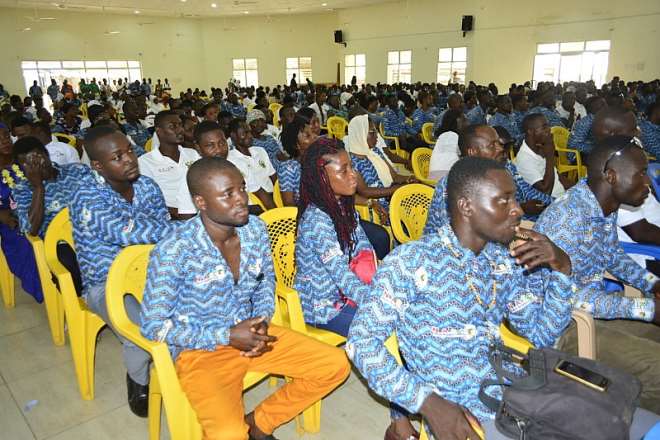