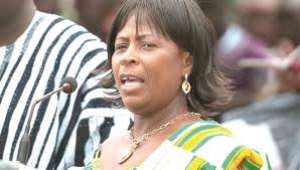 Honourable Comfort Doyoe Cudjoe Ghansah, Member of Parliament for Ada Constituency has pronounced that members of parliament who also serve as ministers of state have been taking double salary since 1992.

The MP explained that apart from the normal salary that the ministers will take, they are also given something small for serving as ministers of state. This she says is because of the double work they do.

The former minister of state during the National Democratic Congress’s (NDC) term in office, was today summoned to the Criminal Investigation Department together with Honorable Eric Opoku, former Brong Ahafo regional minister and Honorable Inusah Fusseini. The CID today served the three with a caution statement which they will further be investigated on the charges of stealing.

This ordeal did not go down well with Honorable Doyoe and she has alleged that there are some ministers within the New Patriotic Party’s (NPP) Government that are living in government Bungalows and still taking rent money from the government when she was being interviewed on the Ekosii sen program. This she believes is also the same as taking double salary.

“Today some ministers are living in bungalows and still taking rent money from government”, she revealed.

However, when she was asked by the host of the program, Osei Bonsu to list names of some ministers who are living in bungalows and still taking rent money, she said for now she will not give out names but the time will come when she will.

She further questioned the NPP as to whether ministers taking double salaries is or is not something that was there previously when they were in power.

Honorable Doyoe will report back to the CID’s office with Eric Opoku and Inusah Fusseini on the 14th of May 2018.