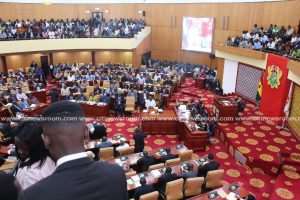 This was amidst a boycott by the Minority for the third time since the bill was first discussed in the House last week.

The Minority had accused government of trying to rewrite the country’s history with the bill.

The Minority in Parliament on Friday staged a walkout for the second time to express their disapproval for the holiday Amendment Bill which seeks to scrap Republic and AU days as public holidays and introduce August 4 as Founders’ Day and January 7 as Constitution Day leaving September 21 as a commemorative day.

The National Democratic Congress (NDC), known for its support for Nkrumaist ideals, said the move is an attempt to distort Ghana’s history.

We won’t recognize Nkrumah as the only founder of Ghana – K.T. Hammond

The Member of Parliament for Adansi-Asokwa, K.T Hammond last week mounted a spirited defence for the government’s holidays Amendment Bill insisting that there was no way Ghana’s first President, Kwame Nkrumah will be recognized as the only founder of the country.

KT Hammond insisted that the argument by the Minority was flawed simply because the amendment has the backing of many historians in the country.

“This is an extremely poor analogy by the Minority which is rather annoying a number of historians in this country. Let us get history right, how will you say there is only one founder of Ghana? We [NPP] of our [Dombo-Busia] tradition will never accept that Kwame Nkrumah was the founder of Ghana. He was one of them. Among the lot, I will not even say he is the Primus inter pares.“We have Paa Grant and JB Danquah, Ako Adjei putting together resources to bring you from the diaspora, how do you come and say you are the person who started the talk. We will never agree””

There have been varied views on the celebration of the Constitution Day.

The Head of European Studies at the University of Ghana, Prof. Yaw Gyampo, in a statement on the matter said the celebration of Constitution Day is a celebration of “mediocrity”.

The government contended that celebrating the day as Founder’s day with Ghana’s independence achievement credited solely to Nkrumah was wrong as others including the Dr. J.B. Danquah also played key roles in the country’s independence struggle.

Some persons and groups including the Convention People’s Party which was formed by Kwame Nkrumah criticized the government for the declaration, describing it as an attempt to alter the country’s history.